The hippo has been spotted on and off over the past few months after false reports of it being eaten earlier this year were dismissed. 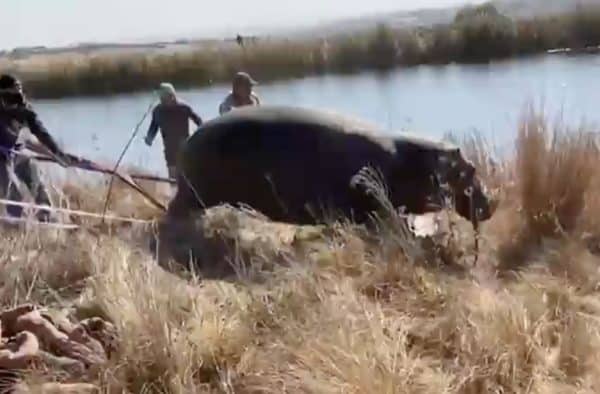 In an Instagram post on Saturday, Carolyn Steyn, well-known philanthropist and the wife of Steyn City billionaire developer Douw Steyn, shared a video of the famous “Fourways Hippo” finally being recaptured.

She wrote: “Finally caught! And shortly on its way to a new home where it will live happily in safety. Well done #SteynCity and the veterinary team for all your dedication and hard work to save this beautiful animal. See even hippos want to live in Steyn City!”

Earlier this year the Endangered Wildlife Trust (EWT) offered its support in assisting the Gauteng department of agriculture in monitoring the whereabouts of the hippopotamus.

The hippo had been spotted in northern Johannesburg since December last year.

EWT planned to bring in technical expertise, including a drone, to find the hippo.

The animal was last seen in Northern Farm MTB, an outdoor recreational facility near the Diepsloot informal settlement, which is not far from the luxurious Steyn City development.

It was suspected to have used river systems to move from the Hartbeespoort Dam area.

Hippos are capable of covering long distances in search for food.

EWT senior manager Constant Hoogstad told The Citizen there are hippos that have been roaming areas south of Chartwell and along the Crocodile River for many years.

They very rarely get close to people, and it is for this reason that they prefer residing in this area, Hoogstad explained.

In the Northern Farms area where it was most recently seen, Hoogstad said hippos are quite undistributed, due to the thousands of hectares of semi-protected land and sewage works.

“It is dead quiet at night when they feed, and in the day no one disturbs them.”

Hoogstad dismissed fake news about the hippo being shot and eaten, saying the images used to portray this false update was from an incident that took place in another African country.

“We’ve dealt with leopards on Hendrik Potgieter. We have reintroduced cheetahs to Rietvlei reserve. There was a hyena in Randburg a few years ago. There is wildlife all around us. But it’s not like there’s a pod of hippos walking around,” Hoogstad said.

The hippo in question likely strayed from a small pod of hippos, he said.

Digital Vibes: How Mkhize's aide splurged on Gucci, Smeg and a Turkey holiday
19 hours ago
19 hours ago

Digital Vibes: How Mkhize's aide splurged on Gucci, Smeg and a Turkey holiday
19 hours ago
19 hours ago