The South Africa men's hockey team cannot afford to lose to Austria in the 6pm third Test match at Queensmead in Durban Thursday if they hope to keep the series alive. 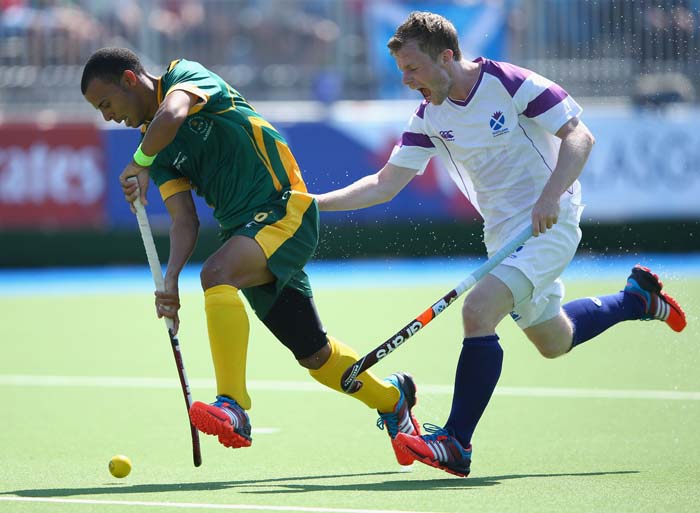 Michael Bremner of Scotland tries to tackle Ignatuis Malgraff of South Africa during the Mens Hockey match between South Africa and Scotland at Glasgow National Hockey Centre during day two of the Glasgow 2014 Commonwealth Games on July 25, 2014 in Glasgow, United Kingdom. (Photo by Ian Walton/Getty Images)

A nail-biting 4-3 win in the second Test Tuesday night gave the Europeans a 1-0 lead in the series after Monday’s first encounter was drawn 1-1.

Friday’s scheduled 2pm fourth and final Test of the series at Queensmead has been moved forward to 1pm in order to accommodate flight changes and the men in green and gold would dearly love to go into that clash knowing that they could still at least leave the series tied or at best clinch the rubber.

So nothing less than a draw or win will suffice Thursday night and the do-or-die nature of this third Test match – where the Austrians will be going all-out to kill off SA’s hopes with another victory – makes it likely that a crowd even bigger than the excellent support already provided by the fans will be in attendance.

SA, full of exciting new, untried players alongside a sprinkling of the tried and test, have been absolutely superb in patches but the wily, more experienced Austrians have too often managed to soak up the pressure and missed opportunities from the lads in green and gold before punishing them against the run of play.

It has been both exhilarating and at times frustrating for SA supporters but the emergence of the new faces wearing South African colours at Test match level is surely the most memorable aspect of this series and there is no doubt that each and every player in head coach Fabian Gregory’s team will be giving it their all to level the series Thursday.