The video, which has garnered thousands of views, shows a baboon stealthily approaching a blue Toyota Corolla with his family in tow. 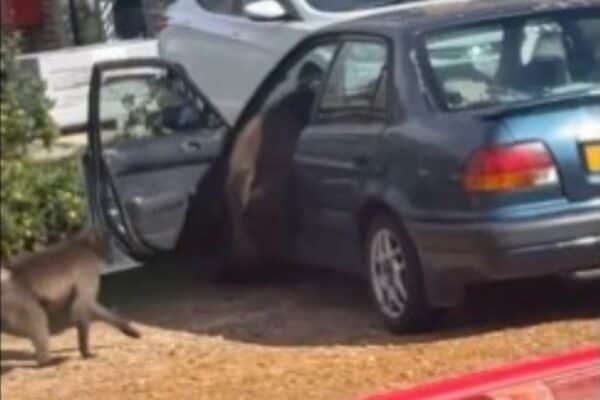 Screengrab of the video

Crime is really getting out of control in South Africa and it seems animals, or more specifically baboons, are also joining in.

The revelation comes after a video was circulated on social media showing that even some animals have embarked on a crime spree with clever manoeuvres to fool everyone, but not all the time.

It was shared by anti-crime activist Yusuf Abramjee on Twitter .

The video, which has garnered thousands of views, shows a baboon stealthily approaching a blue Toyota Corolla with his family in tow.

To the surprise of the person filming the heist, the leader of the pack carefully opens the car door and starts surveying the vehicle for anything he can get his grubby hands on.

A few seconds later, a man rushes towards the car and chases the baboons away.

The person filming the incident could not believe what he just saw and passed a remark in Afrikaans.

“My bliksem…steel hy die kar?” (What the hell, is he stealing the car?)

It’s unclear where the attempted robbery was filmed or how old the video is, but it is evident that while humans have been watching animals, they too have been watching humans and have become savvy, picking up a few bad habits from people.

Meanwhile, like humans, animals also get angry if they are teased.

Earlier this month, a screaming zoo visitor got the fright of his life after he was grabbed by an orangutan, who stuck his arms through his cage’s bars and refused to let go of his leg after the boy jumped over the safety rail to get a closer look.

The 19-year-old Hasan Arifin leapt towards an ape cage at Kasang Kulim Zoo in Indonesia.

Arifin leaped over the rail to confront the normally gentle great ape called Tina and began filming himself while dancing in front of her.

In the video, Tina can be seen dragging Arifin closer as he screams “No, no, no!”

As the teen starts to wriggle free, Tina pulls his foot towards her mouth and tries to bite it before he eventually makes his escape.