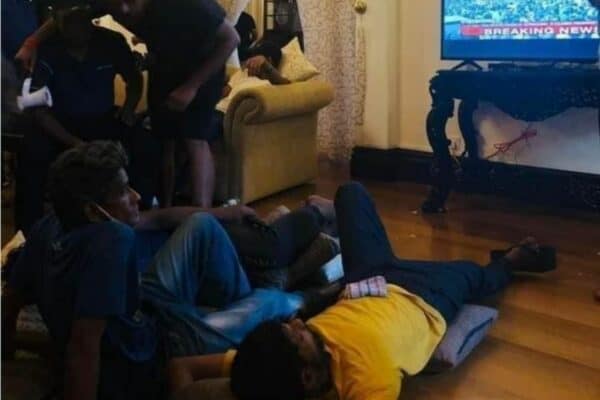 Several South Africans have reacted to the protest action in Sri Lanka when thousands stormed the president’s luxury palace on Saturday.

Pictures and videos have been doing the rounds on social media of protesters making themselves comfortable in the president’s home.

The protest action was sparked by the tough economic conditions in the country.

Reports have also suggested that Sri Lanka has defaulted on its foreign debts.

Other challenges faced by citizens include long power cuts, higher prices and a scarcity of essential items such as food and medicine.

Just this year alone, the cost of living has skyrocketed to levels never seen before.

Fuel increases in the country have forced many to dig even deeper into their pockets.

As if that is not enough, the power outages as a result of load shedding, have also been a nightmare for many.

Several citizens have already started expressing their dissatisfaction with the living conditions through different forms of protests. Last week, residents of Mpumalanga and parts of KwaZulu-Natal (KZN) embarked on so-called “total shutdowns”.

Protests are common in South Africa, especially where poor service delivery or the lack thereof is concerned.

One of those, was Carl Niehaus, former spokesperson of the MK Veterans.

In a video shared on Twitter, Niehaus said the economic crisis in Sri Lanka was similar to what’s happening in South Africa.

Another person who reacted to the happenings in Sri Lanka, was the daughter of former president Jacob Zuma, Dudu Zuma-Sambudla.

She retweeted a picture of the Sri Lankan protestors who stormed the house of the president, sitting comfortably while watching the news on TV regarding their protest action.

Other South Africans also weighed in on the situation in Sri Lanka. Here are some of their reactions: