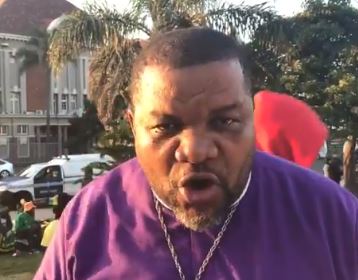 Bishop Timothy Ngcobo, Jacob Zuma's pastor, says he will gather his flock for Easter services and continue church work because God is the only way to cure the Covid-19 pandemic. Picture: Twitter / @DasenThathiah

Bishop Timothy Ngcobo says he will gather his flock for Easter services and continue church work because God is the only way to cure the Covid-19 pandemic.

On Monday, Ngcobo, who is based in KwaZulu-Natal and is former president Jacob Zuma’s pastor, said the government was not adequately respecting what “has to be done during these times”.

“I believe in God and also believe that if the government can allow the church to do what has to be done, then I think there will be a cure immediately.”

Ngcobo spoke out about his intention to ignore the national state of disaster as the KZN government met with religious leaders to brief them on the Covid-19 situation in the province.

He said he would not abide by any laws and would happily be arrested for gathering more than 100 people.

“The only thing that they will do is arrest me. I am prepared for that. It is not about criminals only, even the people doing good things, they only praying for their countries, they are being arrested for government reasons.”

Earlier in the day, religious leaders, who met with KZN Premier Sihle Zikalala and members of his provincial cabinet, slammed churches that chose to gather despite President Cyril Ramaphosa’s disaster declaration.

However, Bishop Thulani Gwala, a church leader at the Ukuhlangana KwaMazayoni Church (United Members of the Zion Church of SA), condemned Ngocobo’s statements.

“Some are [conveying] bad information that we will continue to go to Good Friday. [We] need [to] immediate act on that. We see people spreading that we are defying what [the] president said … we are saying we are complying with government.

“Those statements out there are from individual people. This is not a political issue. We apologise for that statement and will comply with everything [the] government has said.”

Ngcobo said people should always turn to God in times of need.

“Why are we forgetting that? Now we are rejecting the Bible and running under the state of emergency? I think even Ramaphosa needs the church to rise so God will bring a cure.”

Zikalala said he had sent a team to meet with Ngocobo and why he would “want to put the lives of our people in jeopardy”.

“Nobody will have a gathering of more than 100 people. We will not allow that to happen.”