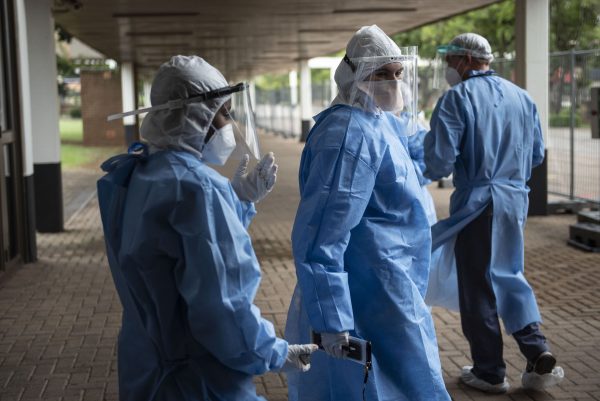 Johnson & Johnson has applied for authorisation for its coronavirus vaccine in the European Union, with a decision possible by the middle of March, the European Medicines Agency says.

A Dutch court backs a case brought by Virus Truth, a group which campaigns against coronavirus restrictions, and orders the government to immediately lift a nationwide curfew that sparked the worst riots in the Netherlands for decades.

The Dutch government challenges the decision, and the court of appeal starts hearing the case at 1500 GMT.

US President Joe Biden sidesteps a divided Congress and seeks support for his $1.9-trillion economic rescue package from ordinary voters at a televised town hall meeting in Wisconsin, his first presidential trip.

Back to school in Scotland

Scotland will start allowing children back to school from next week, First Minister Nicola Sturgeon announces. British Prime Minister Boris Johnson has said that schools in England are to remain shut at least until March 8.

North Korean hackers tried to break into the computer systems of pharmaceutical giant Pfizer in a search for information on its vaccine and treatment technology, South Korea’s spy agency says, according to reports.

Japan outlines a cautious vaccine rollout a day before jabs begin, with the minister overseeing the process admitting he has “no idea” how much of the population will be vaccinated by this summer’s Olympics.

The Dutch economy, the eurozone’s fifth-biggest, shrank 3.8 percent in 2020, its sharpest contraction ever measured, even though the country had far more relaxed coronavirus rules than most of its European counterparts.

South Africa offers its doses of the Oxford/AstraZeneca Covid-19 vaccine to the African Union after scrapping their use due to concerns they fail to counter the new variant discovered in the country.

At least 180.86 million anti-Covid vaccine doses have been injected in 96 countries and territories, according to an AFP count based on official sources on Tuesday at 1800 GMT.

The virus has caused at least 2,408,243 deaths since the outbreak emerged in China in December 2019, according to a tally from official sources compiled by AFP on Tuesday.

Daily news update: Zuma to lay charges against Downer, SIU vs Mkhize and Eswatini protests
2 days ago
2 days ago
PREMIUM!

Daily news update: Zuma to lay charges against Downer, SIU vs Mkhize and Eswatini protests
2 days ago
2 days ago
PREMIUM!