Anti-vax doctor should stick to her field of expertise, says expert

The South African Medical Association said that spreading false information on the vaccine by doctors was 'unethical and illegal'. 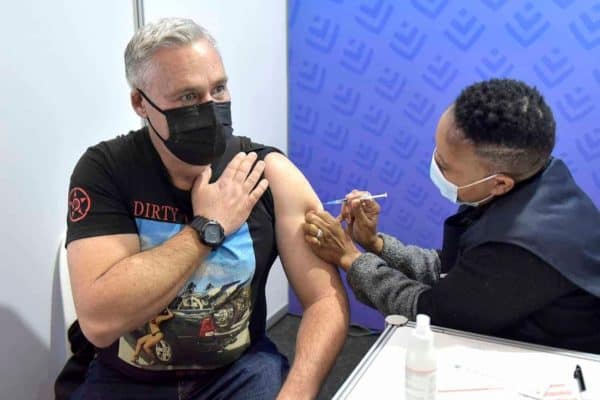 Heinz Glockle gets his vaccination from Sr Lungile Dlamini at the Discovery vaccine centre at Gallagher estate in Midrand, 7 July 2021. Picture for illustration: Neil McCartney

It is still unclear what the repercussions would be for heart surgeon Dr Susan Vosloo after she said the side-effects of the Covid vaccine were worse than the virus.

On Sunday, the South African Medical Association (Sama) said in a statement spreading false information on the vaccine by doctors was “unethical and illegal”.

Sama added that Covid poses a significant medical and public health risk and notes with grave concern the spread of false information about vaccines by individuals within the medical fraternity.

“Medical professionals who propagate Covid vaccination misinformation may discourage people from becoming vaccinated, which could lead to the preventable loss of life,” the association said.

Sama said it will not support any of its members who spread misinformation about Covid vaccines.

“Anyone who does spread the misinformation is liable. Even if you are on a family Whatsapp group and you post it there, you are spreading misinformation,” Abdool Karim said.

She added a person can be sentenced up to six months’ imprisonment for breaking the Disaster Management Act regulations.

“It’s troubling when somebody who is a doctor and prominent as SA’s first female heart surgeon engages in the adding of misinformation,” said Abdool Karim.

She said people were scared of the vaccine.

“I may or may not get Covid but if I get the vaccines those side effects are very real and if somebody is going around saying it’s worse than Covid, people are going to be reluctant,” Abdool Karim added.

She referred to former Pandemic Data and Analytics (Panda) professor Michael Levitt who formerly served on the board of Panda and held two Nobel prizes, but was spreading misinformation.

“His Nobel prizes turned out to be in mathematics and statistics . With Vosloo, she’s a doctor and a heart surgeon. Who should we get info from about vaccines?” Abdool Karim asked.

She said there was not a grand conspiracy around Covid and the vaccines.

“With internet misinformation and all the conspiracies popping up such as ivermectin, which was a conspiracy on how [the South African Health Products Regulatory Authority] was withholding the scientific treatment, what have we found? “Has it changed anything?” Abdool Karim asked.

Levitt was a “worrisome case study, a source of headline-grabbing false balance, and a conundrum for universities”, according to statnews.com.

“He now admits he was wrong about the number of deaths in Israel, and wrong that the outbreak would be over in the United States by August 2020. He’s broken ties with the anti-lockdown group Panda due to their anti-vaccine
stance,”it reported in May.

Clinical risk expert and pharmacologist Dr Jacques Snyman said doctors often have opinions outside of their field of experience or specific training.

“This has no more weight than the opinion of any other person with the same vacuum of experience and or training. This is simply a personal opinion at best and is often dangerous,” Snyman said.

Professor Ian Sanne, a member of the Covid ministerial advisory committee, said the critique raised by Vosloo was filled with inaccuracy and false information and had been cobbled together to formulate an anti-vaccine opinion
that was not scientifically based.

“The faster people accept vaccines, the faster the economy will return to normal,” Sanne said.

Christopher Tsatsawane, head of corporate affairs for the HPCSA, said its policy remains that individuals have the right to choose to take or decline the vaccination and practitioners must advise their patients based on scientific
and clinical information.

“However, based on available evidence, the HPCSA believes that vaccines are lifesaving and the public should be advised of their value,” Tsatsawane said.

Undocumented foreigners get vaccinated
3 days ago
3 days ago

Undocumented foreigners get vaccinated
3 days ago
3 days ago