Vaccinations might open earlier for all adults above 18, says health minister

Health Minister Dr Joe Phaahla says Covid-19 vaccinations for all adults over the age of 18 might open before the end of this week. 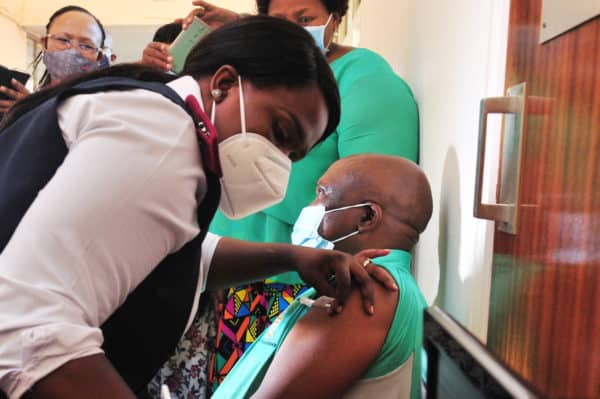 Health Minister Dr Joe Phaahla has revealed that the government is planning to open Covid-19 vaccinations for all adults over the age of 18 in South Africa earlier than expected.

There have been calls for the vaccine to rolled out to 18-to-34 year olds immediately, rather than waiting until 1 September.

This is due to the low turnout of people in the past week, despite government opening more vaccination sites across the country for citizens to get either the double-dose Pfizer-BioNTech or the single-dose Johnson & Johnson (J&J) shots.

Speaking to 702 on Monday, Phaahla expressed his concern over vaccine conspiracies circulating on social media, with the minister suggesting that these factors may have played a role in the slow progress at vaccination sites.

“The momentum of the fake news, the anti-vax campaign is also gaining some momentum, especially on social media. So we need to cope up with social media at the same time,” he said.

The minister also indicated that his department had been engaging with Cabinet in an effort that could see the initial vaccination date for the last age group moved up either to the end of this week, or from next Monday.

“We had targeted [the] 1st of September, which is 14 days from now, but from our meeting yesterday [Sunday] we are just waiting for further consultations. In all probability, if not before the end of this week, at the latest, [then it will be at] the beginning of next week. We are in further consultations with our leadership in Cabinet, we will probably before the end of this week open for all adults above 18,” Phaahla said.

Phaahla further said his department did not support relaxing South Africa’s lockdown restrictions, highlighting that Western Cape was yet to reach its peak of the third wave.

The total number of vaccines administered currently stands at 9,557,542.

Business for South Africa (B4SA) announced on Monday that all private-sector vaccination sites across South Africa were now accepting walk-ins from anyone who is eligible to get the Covid-19 vaccine.

“Sites will accept anyone for vaccination who has an ID, passport or other form of identification, regardless of their nationality,” the group said in a statement on Monday.

The sites include independent community pharmacies and corporate pharmacy chains, such as Dis-Chem and Clicks, medical scheme vaccination sites and private hospitals.

B4SA also confirmed that while sites would prioritise those with scheduled appointments and those over the age of 60, no person above the age of 35 was required to pre-register before visiting a site for a vaccination.