Outrage after Spanish newspaper publishes racist cartoon of Omicron, implying the variant originated in SA and spread in Europe. 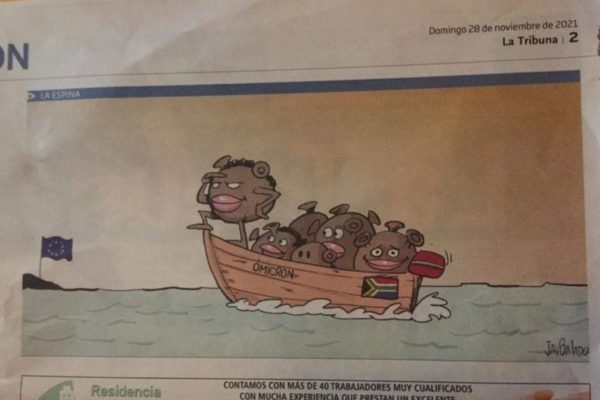 A Spanish newspaper and its cartoonist has apologised after coming under fire for printing a cartoon with racist undertones and a factually incorrect depiction of the Omicron variant of the Coronavirus.

The cartoon by Javi Salado, printed in the newspaper on 28 November, depicts brown coloured viruses on a boat with the South African flag heading for Europe.

The newspaper La Tribuna de Albacete and Salado said they wanted to apologise to readers who may have felt annoyed or offended by the cartoon.

“There has been no intention on the part of the cartoonist to link the transmission of the new variant of the SARS-CoV-2 virus with positions that deviate from the principles of equality and non-discrimination,” said the paper.

The cartoon in question was either not published on the newspaper’s website or was withdrawn after the controversy.

But Salado’s first responses defended claims the image had racial undertones saying that his intention “was quite the opposite.

“Immigration is the result of the oblivion subjected to Africa for centuries. Now we have done it again, leaving them to their own devices with vaccines,” said Salado.

Later on, he changed his tune and apologised, blaming stereotypes and delivery times.

“The use of stereotypes in the cartoon has been very unfortunate. The haste to send for publication without letting it rest to detect other interpretations that could be given does not make me feel proud of the result. It remains for me to ask – again – apologies again,” he tweeted in Spanish.

The Department of Internation Relations and Cooperation (Dirco) spokesperson Clayson Monyela tweeted the Spanish Embassy saying, “Dear Excellencies @EmbEspPretoria, This cartoon by the Spanish newspaper La Tribuna is racist & very offensive. #Omicron is NOT a South African variant & there isn’t a single case of South Africans trying to cross into Europe on boats. I’ll be writing to them. Disgusting!”

One movement leader Mmusi Maimane slammed the cartoon, saying, “This is nonsense. A virus that most likely came to Africa from Europe is being depicted as black and South African. The omicron response from the international community has exposed deep-seated, anti-African sentiment that must be addressed.”