Crossing the vast, roadless Darien Gap rainforest is the only option for US-bound migrants traveling overland from South America. 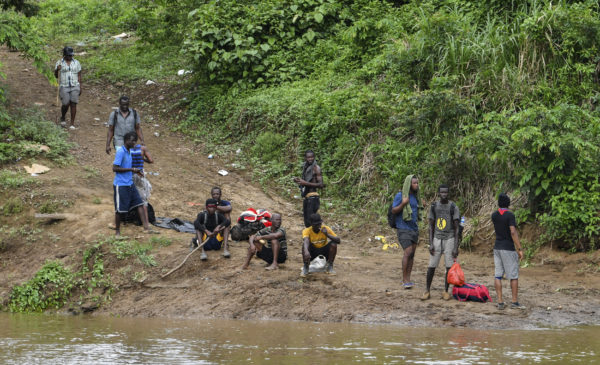 Haitian migrants rest after walking through the jungle in La Penita village, Darien province, Panama, on May 22, 2019. (Photo by Luis ACOSTA / AFP)

The number of US-bound migrant children crossing the dangerous Darien jungle in Panama on foot has increased more than 15-fold in recent years and is likely to rise further during the pandemic, the UN children’s agency warned on Monday.

Children accounted for just two percent of these migrants in 2017 but that had risen to more than 25 percent in 2020, UNICEF said in a statement.

The Darien Gap jungle, the only land corridor between Colombia and Panama, is “one of the most dangerous routes in the world due to the mountainous terrain, wildlife and insects, as well as the presence of criminal organisations,” the agency added.

Crossing the vast, roadless Darien Gap rainforest is the only option for US-bound migrants traveling overland from South America. Most of those making the crossing are Haitians and Cubans, but there are also some Asians and Africans.

“I’ve seen women step out of the jungle carrying their babies in their arms after walking for more than seven days without water, food or any kind of protection,” said Jean Gough, UNICEF regional director for Latin America and the Caribbean.

In 2019, a peak of nearly 4,000 children made the crossing. Half of them were under five years old and many arrive injured and with serious physical and psychological problems.

Experts believe more and more migrants are choosing to travel with their families, including young children and pregnant women, to avoid being deported to the different countries they pass through.

“These families are pushing their own limits and putting their lives in danger, often without realising how much of a risk they are taking. Those who manage to eventually cross this perilous border are physically and mentally devastated,” Gough added.

Migration across the dangerous jungle is likely to increase in the next months due to the economic crisis and unemployment generated by the Covid-19 pandemic, coupled with violence and climate change, UNICEF said.