EU ‘not informed’ on US, UK and Australia alliance

The new alliance between the US, Britain and Australia -- dubbed AUKUS -- overshadowed Borrell's own announcement detailing a new Indo-Pacific strategy for the EU. 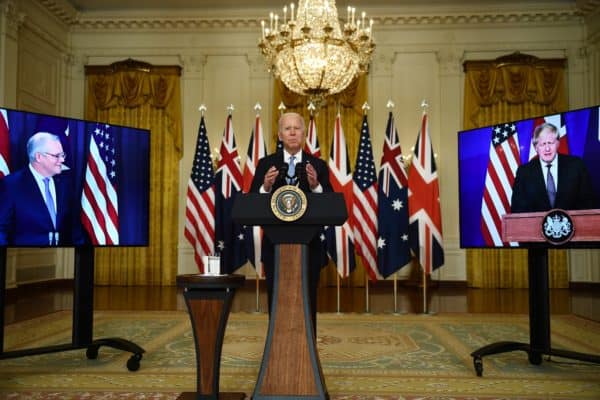 The EU complained on Thursday it was kept out of the loop on a new military partnership between the US, UK and Australia, as Brussels laid out its own strategy for the Indo-Pacific.

Washington, London and Canberra unveiled the alliance on Wednesday in what was seen as a move to counter China’s rising might.

The announcement has fuelled fears that Europe is being cut out by Washington, with EU capitals still smarting over the way the US handled the withdrawal from Afghanistan.

The agreement to provide a nuclear submarine fleet to Australia sparked fury in EU member France, which saw its earlier multi-billion dollar deal with Canberra scrapped.

“We regret not having being informed, not having been part of these talks,” EU foreign policy chief Josep Borrell said.

“I understand how disappointed the French government will be.”

But he insisted that ties with Washington had still improved dramatically since President Joe Biden replaced Donald Trump.

The new alliance between the US, Britain and Australia — dubbed AUKUS — overshadowed Borrell’s own announcement detailing a new Indo-Pacific strategy for the EU.

“The AUKUS security partnership further demonstrates the need for a common EU approach in a region of strategic interest,” European Council chief Charles Michel wrote on Twitter, adding that EU leaders would discuss it at a meeting in October.

The 27-nation bloc is looking to strengthen ties in the vast region where it says it is “already the top investor, the leading development cooperation partner and one of the biggest trading partners”.

Part of the plan would include “exploring ways to ensure enhanced naval deployments by EU Member States to help protect the sea lines of communication and freedom of navigation”, a statement said.

This could anger China, which denied a request from a German frigate to make a port call in Shanghai this week.

But Borrell insisted the strategy was “one of cooperation, not confrontation” with China.

The statement appeared aimed at drawing a line between the EU and Washington’s approach of pressing its allies to take an increasingly tough approach towards China in the region.

Borrell said Australia’s decision to turn its back on France in favour of the American-British pact would not harm EU ties with Canberra as the two sides look to negotiate a free trade deal.

“We want to foster cooperation with countries such as Australia,” Borrell said.

“Trade agreements with Australia will continue down their path.”