Kyiv has said that if NATO is not willing to shut Ukrainian airspace then the allies should supply it with warplanes. 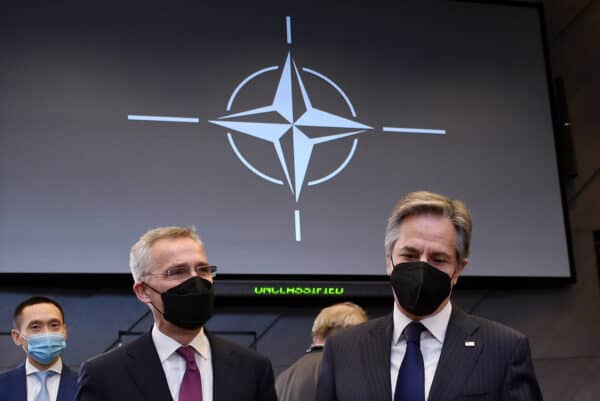 NATO on Friday rejected pleas from Ukraine to impose a no-fly zone to halt Russia’s bombing, but Western allies warned President Vladimir Putin of fresh sanctions if he does not stop his war.

Foreign ministers held emergency meetings at NATO and at the European Union in Brussels, on the ninth day of Moscow’s invasion of its pro-Western neighbour that has upended the global order.

“Act now before it’s too late. Don’t let Putin turn Ukraine into Syria,” Dmytro Kuleba tweeted after making an impassioned plea to the alliance via videolink.

But NATO chief Jens Stoltenberg said the alliance would not intervene in the conflict over fears of a direct clash with Moscow that could spiral into a nuclear war.

“The only way to implement a no-fly zone is to send NATO fighter planes into Ukraine’s airspace, and then impose that no-fly zone by shooting down Russian planes,” Stoltenberg said after the urgent meeting.

“If we did that, we’ll end up with something that could end in a full-fledged war in Europe, involving many more countries and causing much more human suffering.”

NATO members have rushed thousands of troops to eastern Europe to bolster the alliance’s flank closest to Russia and are sending weapons to help Ukraine defend itself.

Kyiv has said that if NATO is not willing to shut Ukrainian airspace then the allies should supply it with warplanes and air defence systems to help stop Russian air attacks.

Western nations have so far said they will not deliver planes and most arms deliveries have focused on light weapons, and anti-tank and shoulder-fired anti-aircraft missiles.

While NATO rebuffed calls for a no-fly zone, the West threatened fresh sanctions after hitting Russia with unprecedented punishment that has sent its economy into turmoil.

Kyiv has demanded more sanctions in the wake of the shelling of a nuclear plant by Russia’s invading forces.

“To be very clear, we are ready to take further severe measures if Putin does not stop and reverse the war he has unleashed,” European Commission chief Ursula von der Leyen said.

US Secretary of State Antony Blinken said the allies have to sustain the pressure on the Kremlin “until the war is over”.

He warned that if the West allowed Russia to violate international principles “with impunity, then we’re opening a Pandora’s box in every corner of the world”.

Some EU nations want the bloc to toughen its sanctions by cutting more banks from the global SWIFT interbank messaging system and begin targeting Russia’s key oil and gas exports.

But there is reluctance from key economic powers like Germany to cut off a supplier responsible for 40 percent of the bloc’s gas and 10 percent of its oil.

Yet “everything remains on the table,” EU foreign policy chief Josep Borrell said.

“Today, what we see is the ugly face of war erupting again in our borders and the Russians are bombing and shelling everything.”

Irish Foreign Minister Simon Coveney said that the EU was already preparing a fresh round of sanctions against Moscow and that they could be agreed soon.

“We’re not signing off on a new package of sanctions today, but that’s clearly underway,” he said.

“I suspect, we’ll be agreed in the early days of next week.”