The first lady has had no qualms about publicly humiliating the vice-president, and when she suspected Mugabe's spokesperson was in his camp, she publicly insulted him too. 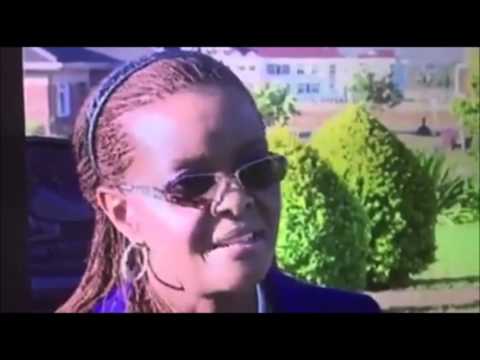 It remains unclear whether Emmerson Mnangagwa, the recently fired Zimbabwean vice-president, has returned home as claimed by one Twitter user purporting to be him earlier today.

What is known, though, is that Grace Mugabe has devoted much time in her speeches in the past year waging a war of words against the veteran freedom fighter.

Speaking to the media this morning, the country’s only independent member of parliament said what broke the camel’s back within the army ranks and war veterans was Grace Mugabe’s long-standing attacks on Mnangagwa.

Below is the recent vitriol the woman who achieved her PhD in three months in changing social structure and functions of the family spewed against Mnangagwa.

During the final leg of the Presidential Interface Youth Rally addressed by Mugabe in September 2017, the Zimbabwean first lady launched a scathing attack on the vice-president.

She said the veteran politician was making Mugabe regret appointing him in the first place.

A few days later, she upped the ante and told her party supporters: “My husband is an intelligent man, the cleanest person on earth, the most disciplined man on earth,” and not the “vamba zonke type” who has eyes only for her.

She said it was nonsensical she would be accused of poisoning Mnangagwa when she had so much going on for her.

And it appears the nonagenarian, who has recently been receiving extensive but undisclosed medical treatment in Singapore, was swayed by his young wife.

A few months back he had admonished his wife and what he called the “Mnangagwa faction”, but this time he dared him to form his own party during the the Zanu-PF rally at White City stadium on 4 November 2017 in Bulawayo.

More tellingly, Mnangagwa himself had called Grace a “madam” who exposed another fired vice-president Joyce Mujuru’s plan to topple Mugabe. The state broadcaster ironically strapped the speech delivered by Mnangagwa as “Amazing Grace”.

The campaign against the vice-president continued unabated earlier this year.

The first lady told a crowd of supporters that Mnangagwa attempted a coup against President Mugabe in 1980. She called him a “liquidator” and a “raptor”, and urged the docile crowd to go look up those words in the dictionary.

And, if ‘Amazing Grace’ perceived any civil servant to be against her G-40 politicians, who are believed to have ambitions of a clean sweep at the upcoming Zanu-PF elective conference, or seen to be sympathetic to Mnangagwa, they were blasted.

George Charamba, the secretary of information and Mugabe’s spokesperson, was told “you can not separate the president and his wife”.

Mugabe admonishes his deputy at airport over poisoning allegations – report