Scores of school children abducted from Islamic seminary in Nigeria

The abduction came a day after 14 students from a university in northwestern Nigeria were freed after 40 days in captivity. 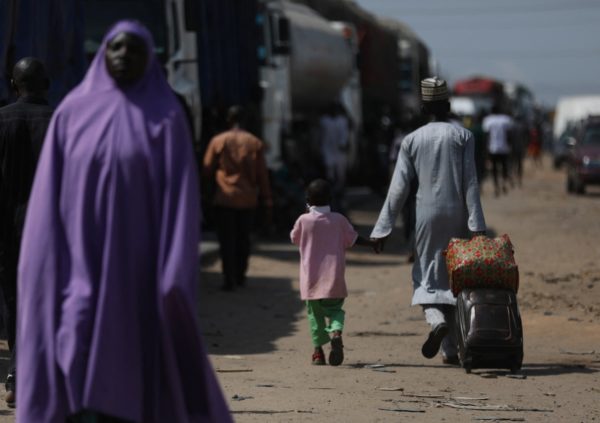 Picture File: A man walk with his son as residents block the Kaduna-Abuja highway in Gauruka, near Abuja, Nigeria, on 24 May 2021 during a protest against incessant kidnapping and killing after gunmen kidnapped 16 residents and killed three others in Niger State. Picture: AFP.

Gunmen kidnapped scores of children from an Islamic seminary in central Nigeria, officials said, the latest in a string of such incidents plaguing the populous African nation.

Some 200 children were at the school in Niger state on Sunday during the attack, the local government tweeted, adding “an unconfirmed number” were taken.

While assuring d parents of d abducted children of their safe return as the security agencies have been directed to bring back d children as soon as possible, the Gov also urged d citizens to cooperate and share information that will help in d quick rescue of d children.

The abduction came a day after 14 students from a university in northwestern Nigeria were freed after 40 days in captivity.

Niger state police spokesman Wasiu Abiodun said the attackers arrived on motorbikes in Tegina town and started shooting indiscriminately, killing one resident and injuring another, before kidnapping the children from the Salihu Tanko Islamic school.

One of the school’s officials, who asked not to be named, said the attackers initially took more than 100 children “but later sent back those they considered too small for them, those between four and 12 years old”.

The state government, in a series of tweets, said the attackers had released 11 of the pupils who were “too small and couldn’t walk” very far.

In a later Twitter thread, the state added the governor Sani Bello had directed “security agencies to bring back [the] children as soon as possible”.

Such seizures have become a frequent way for criminals to collect ransoms.

Since December 2020, before the attack on Sunday, 730 children and students had been kidnapped.

On 20 April, gunmen known locally as “bandits” stormed Greenfield University in northwestern Nigeria and kidnapped around 20 students, killing a member of the school’s staff in the process.

Five students were executed a few days later to force families and the government to pay a ransom.

Fourteen were released on Saturday.

Local press said that the families had paid a ransom totalling 180 million naira ($440,000) for their release.

Africa’s most populous country has been plagued by kidnappings for years, with criminals largely targeting the wealthy and prominent.

But more recently, the pool of victims has expanded with the poor now also taken for ransom.

Earlier this month, hundreds of protesters partially blocked a motorway into the capital Abuja after a spate of kidnappings in the area.

Marching along the highway, a dozen young men chanted: “We won’t accept this, kidnapping must stop!”

The criminal gangs maintain camps in the Rugu forest which straddles northern and central Zamfara, Katsina, Kaduna and Niger states.

Their motives have been financial with no ideological leanings, but there is growing concern they are being infiltrated by jihadists from the northeast waging a 12-year-old insurrection to establish an Islamic state.

Nigeria and South Africa, a team that could make Africa tops
11 mins ago
11 mins ago

Nigeria and South Africa, a team that could make Africa tops
11 mins ago
11 mins ago