The ANC will be dismissive of the protests, but to point to the relative paucity of the turnout is to miss the point. 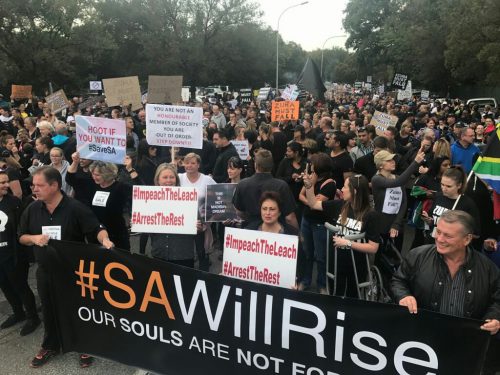 Residents of Edenvale march in a #ZumaMustFall protest.

Those who protested nationwide on Friday are justified in their antipathy – stridently emblazoned on placards – towards President Jacob Zuma for his unabashed ignorance, his unvarnished greed and his undisguised indifference to the fate of the nation he heads.

But they ignore, at their peril, the defining aspect to his make-up – his consummate political skills. Over the past week, a president widely assessed to be on the ropes not only came out fighting with the provocative firing, among others, of a highly regarded finance minister and his deputy. He has also, it seems, triumphed against all odds.

Three of the top ANC office-bearers, Deputy President Cyril Ramaphosa, secretary-general Gwede Mantashe and treasurer-general Zweli Mkhize, broke ranks and criticised the reshuffle harshly. There was fevered speculation that emboldened ANC MPs would join the opposition parties in a parliamentary vote of no confidence in the president.

It briefly seemed that internal antipathies towards Zuma could coalesce, forcing his resignation. But within days, the dissenters had been forced to back down and meekly apologise.

The reality is that Zuma has effectively sidelined his internal foes and gutted the influence of the trade unions and communists upon government policy. He took his gamble at a fortuitous – or clever, his admirers will say – economic moment and, for now, has averted the predicted currency meltdown, despite this week’s ratings agency downgrade to junk status.

The evisceration of Cosatu and SACP members of the tripartite alliance, should please all South Africans. Although there are several prominent SACP members left in the Cabinet, their teeth have been drawn.

It’s against this backdrop, of Zuma crushing internal revolt, that Friday’s protest acquired an exaggerated significance. This was SA’s moment to echo the kind of mass mobilisations, involving hundreds of thousands gathering, that have been used successfully in South America and the former Soviet puppet states, to bring rogue governments to heel.

Zuma’s administration, of course, is not a rogue government but a democratically collected one with the support of over 60% of voters. The #SAUnites protests were never intended, contrary to the assertions of Cosatu, to force the ANC from power, but rather to articulate symbolically the dismay and anger of a sizeable chunk of the populace.

One can be sceptical of the motivations behind the sudden enthusiasm of the middle classes, many of them whites, for radical protest. One might snigger at a stayaway in which most of the participants sought employer condonation for their absence, or took a day’s leave.

When an innately law-abiding, tax-paying group begins to feel that the only way that its interests can be safeguarded is by direct protest action, rather than by lobbying, voting or whinging around the braai fires, it means that something is stirring.

This is not the tipping point that many of the protesters naively might have thought it would be. But it is a significant moment.