When once in a blue moon one of these giants is brought to its knees, there is a certain schadenfreude. 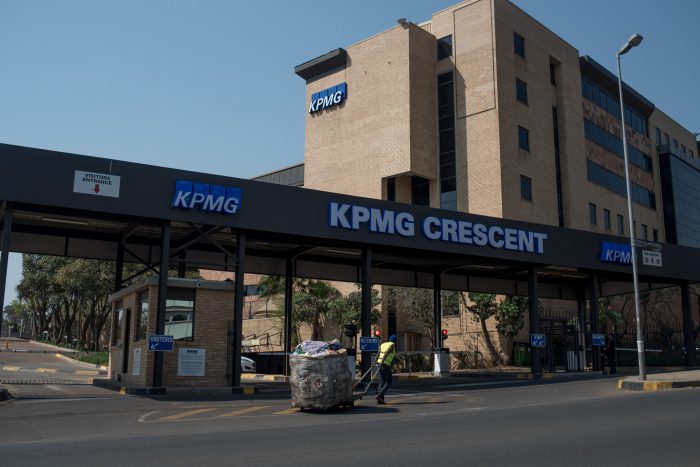 A recycler drags his trolley past the KPMG Offices on Empire Road in Johannesburg on 15 September 2017. Picture: Yeshiel Panchia

Supposedly too big to fail. Certainly too slippery to police. These are factors that SA authorities will have to take account of as they contemplate the next steps in dealing with beleaguered professional services firms KPMG and McKinsey.

The world’s mega-business entities have considerable advantages when compared to their smaller counterparts.

Their wealth, their cross-border operations, their ability to collude against market entrants, to influence politicians, to intimidate critics, and – when all else fails – to suborn law enforcement and judicial officials, make them immune to control.

When once in a blue moon one of these giants is brought to its knees, there is a certain schadenfreude. Everyone enjoys seeing the bully taking a well-deserved thumping. That is why the plight of KPMG-SA, as clients desert and legal sanctions loom, has been watched with widespread public enjoyment.

But equally fascinating has been the sudden counter rally of support for KPMG-SA. The head of the Ethics Institute, Deon Rossouw, argues that while the current outrage over corporate ethical failures is understandable, one must accept that lapses are inevitable.

“The response … must be to help them put themselves together again.”

Concern has also been expressed by former finance minister Trevor Manuel. On the one hand, he wants those involved in state capture to go to jail. On the other hand, Manuel warns it would be a “profound tragedy” for risk management if the big four auditing firms were reduced to three as a result of the KPMG debacle.

This is the “too big to fail” view, based on the premise if KPMG folded or simply closed its doors in SA, there would be a risk of systemic contagion.

But this week, Sarb Deputy Governor Kuben Naidoo said the troubles at KPMG would pose no financial stability risk to the banking sector.

Instead, the firm must be given space to “come clean” – with the implication being that if they do so, the authorities will act leniently.

There is, as yet, no sign of full disclosure from KPMG. In parliament it was evasive in answering questions from MPs.

Indeed, earlier the Independent Regulatory Board for Auditors (Irba) told the standing committee that KPMG had, contrary to assurances, failed to fully co-operate with the Irba investigation.

Similarly tone deaf was McKinsey’s response this week to demands from Eskom that it repay R1.6 billion in consultancy fees for a contract that the state firm says was illegal.

McKinsey would only repay the money, it announced, if the high court ruled that the Eskom officials had acted unlawfully.

Note, McKinsey is not saying it is so confident that the contract is legal that it will defend it in court. On the contrary, it is implicitly conceding that it might very well be illegal, it just isn’t sure.

What McKinsey cannot get, is that the letter of the law doesn’t matter. The contract is ethically indefensible: McKinsey was paid a fortune for doing nothing but act as a conduit to others that have been accused of being corrupt.

Rossouw’s approach might have merit were there compelling evidence that KPMG and McKinsey have confessed all transgressions and are eager to make amends. There is no sign of that.

A judicial punch to the snout and the metaphorical burning of effigies outside their headquarters seem to me reasonable alternatives.