Why is Andile Mngxitama not jailed, under psychiatric care?

Look at our crime statistics, or the mayhem at FNB Stadium last weekend, for a sense of SA law and order. Perhaps this is why reckless firebrands are not prosecuted. 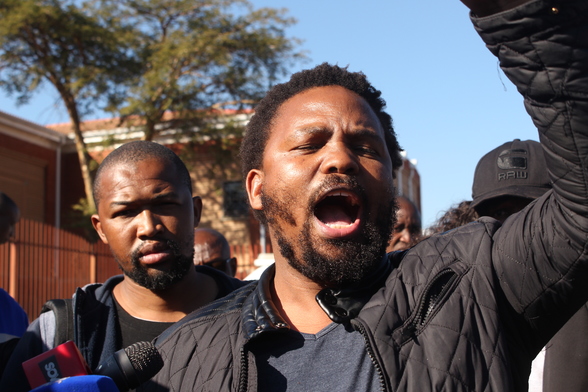 Andile Mngxitama, who threatens to kill whites, will not be stopped by the South African Human Rights Commission (SAHRC).

Anything the SAHRC dishes out will be too soft. Mngxitama must be criminally prosecuted for incitement to violence. He should be jailed, under psychiatric care, as soon as possible for as long as possible. He seems unwell.

And President Cyril Ramaphosa should unequivocally denounce what the Zupta-funded Black First Land First (BLF) leader said at a BLF rally in Potchefstroom on Sunday.

His later claim of “self-defence” because he felt billionaire Johann Rupert had threatened black people during a television interview is implausible.

Mngxitama’s utterances are not constitutionally protected. Section 16 (2) says the right to freedom of expression “does not extend to …. (b) incitement of imminent violence; or (c) advocacy of hatred that is based on race, ethnicity, gender or religion, and that constitutes incitement to cause harm”.

Lack of action against Mngxitama is the latest example where the derelict state leaves others to pursue charges.

This week’s Carte Blanche TV programme highlighted instances where the National Prosecuting Authority (NPA) declined to act after the City of Johannesburg uncovered corruption. In Johannesburg there is suspicion that party politics played a role in decisions not to prosecute. Cases brought by the DA-led administration are brushed aside when cadres protect cadres.

Public confidence in the NPA is low, after years of dysfunction and leadership instability. When Shamila Batohi takes over as national director of public prosecutions (NDPP) in February, she will be the ninth NDPP since Bulelani Ngcuka’s 1998 appointment. There are 200 vacancies in the NPA. In the latest Sunday Times, Lawson Naidoo of Casac (Council for the Advancement of the SA Constitution) says an exodus of senior prosecutors has led to “a dwindling of prosecutorial firepower”.

So the NPA cannot do its job properly, even if it wanted to. What then of other criminal justice/ security organisations? Are our prisons, police and the military functioning optimally? No.

Look at our crime statistics, or the mayhem at FNB Stadium last weekend, for a sense of SA law and order.

Perhaps this is why reckless firebrands are not prosecuted. If the security establishment is dysfunctional, who will contain the potential mayhem when a Mngxitama or a Malema is jailed?

Putting a radical leader behind bars is politically risky for a left-leaning ANC hoping for electoral support from that quarter. However, there is a bigger risk, beyond party politics, when the state is perceived as incapable of containing any violent reaction to the jailing of a radical.

Don’t rely on the SAHRC to turn the tide. With urgency, vote out the ANC which bred and tolerates these hate-spewers.

When competent people, not deployed cadres, are in charge, South Africa will again be filled with hope.