This is the Zuma-faction terror we probably avoided in 2008

The past week has demonstrated starkly the truth that the work of several lifetimes can be destroyed in a day. 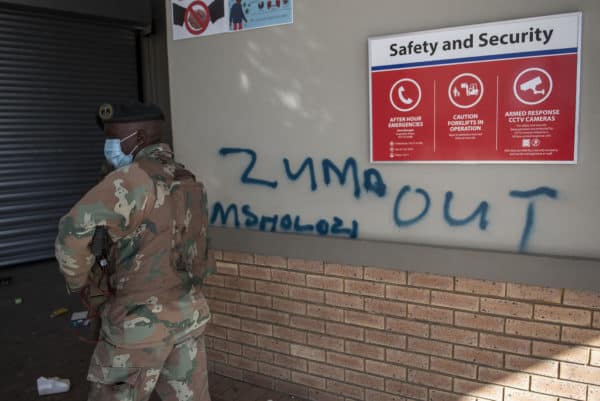 A member of the SANDF is seen walking past graffiti that says "Zuma/Msholozi out" as they battle with looters at Diepkloof Square, in Soweto, 13 July 2021. Shopping centres, malls, and stores have been looted across Gauteng and KwaZulu-Natal for a number of days, allegedly linked to former president Jacob Zuma's imprisonment. Picture: Citizen.co.za/Michel Bega

The scenes of KwaZulu-Natal’s major distribution centres burning yesterday will forever be etched on my memory, leaving me with much the same hollow feeling I recall nearly 20 years ago on 9/11 watching the aftermath of the greatest terrorist act in US history.

What has been happening feels like nothing less than terrorism, and it probably is.

Surely by now we must believe the reports that former president Jacob Zuma’s allies with backgrounds in the intelligence services are behind most of what we’ve seen. It’s unlikely that Zuma himself is actually telling them to do this, but that’s not stopping them, is it?

ALSO READ: South Africa in flames: Is this a Jacob Zuma-linked coup attempt?

Let’s be clear that the people stealing fridges and loaves of bread from ransacked shopping centres are not terrorists. They’re just poor people who don’t know when next there will be any kind of delivery in their area. And in their position, I would have done the same thing.

But it’s the burning that has to get you.

The coordinated multibillion-rand destruction of key supply chains and infrastructure points throughout Zuma’s home province point to the real purpose behind all this so-called anarchy and madness. I noticed the word “ZUMA” graffitied across the side of one delivery van yesterday while a gigantic warehouse went up in smoke next to it.

I can’t tell you if this is all about freeing Zuma, but the evidence of major coordination must make us ask difficult questions about who is behind it and why.

Anyone with even a smidgeon of insight into ANC history will probably be able to locate much of this conflict at the core of what it is: the age-old battle for the heart and soul of the ANC that’s always been tugged between East and West.

Cyril Ramaphosa is undoubtedly the West’s man, although they have probably been cursing their luck over the years that he was the best they could get. Zuma, even more obviously, is a child of the East, Russia, and his friend Putin still plotting after all these years in the Kremlin.

I’m not saying Russia is involved in any of this. But the people behind this are the kinds of people who were taught what they know in Moscow. They are ruthless.

I suspect that the “plan” playing out now was already in place in 2008 when Judge Chris Nicholson threw out the corruption case against Zuma. We were told back then that if Zuma was to go to jail, the country would burn. Many of us had strong reason to believe the very real threat of that happening back then and we heaved a sigh of relief when the case was thrown out for very legally questionable reasons. Zuma ascended to the highest office of the land and proceeded to have his way with us for the next nine years.

With Ramaphosa’s rise to power and Zuma’s mounting problems and advancing age, it seems the country fell into a sense of complacency. Numerous people, including well-informed journalists who were celebrating his imprisonment last week, all repeated their view that Zuma was no longer “popular” and that no one would “kill for Zuma”, as Malema was so keen to do years ago.

Well, so much for that idea.

I repeat: what we’re seeing now was probably meant to have been our fate in 2008. We escaped it, only to be consumed by all the problems that beset us throughout the tumultuous years of ANC rule under Zuma, for good or bad.

It’s all very well to have celebrated the incarceration of Zuma last week as a victory for “the rule of law”. Great. Sure. But if you’re going to strut around and boast of your power, then you had better be ready to back it up. And this week we saw clear evidence that South Africa under Ramaphosa cannot back it up. Communities have been left to fend for and look after themselves.

If Ramaphosa thought he had the goods to really go up against Zuma for the whole nine yards, then this was the week he should have shown it. We should have had soldiers in their tens of thousands deployed within hours of the first signs of unrest. The men and women behind the coordinated attacks should have been rounded up, corralled and sent off to jail for life as the insurrectionists they are.

But he couldn’t do that. He’s clueless. Now, our people will starve, just as these overlords of terror – who are far more loyal to Zuma than Cyril Ramaphosa could ever dream of – have intended.

It’s not enough to have a strong constitution and courts that have an appetite to aggressively enforce it. You need a state capable enough to back it up. Whether you agree with it or not, if you’re going to be the government, then BE the government.

ALSO READ: Unrest in SA will end if Zuma is freed from prison, says foundation

You also need a population that mostly wants to be policed and be part of the state’s social contract – but we mostly don’t even have that on a good day in South Africa.

A day after Ramaphosa announced that the army would be deployed, most parts of KZN were yet to see a single boot on the ground. This morning we were made to watch the almost comical sight of Police Minister Bheki Cele walking around a mall in Mamelodi in Tshwane that hadn’t been burnt to the ground, although all the shops had been looted down to the last shelf, sure.

Eventually, the minister and his entourage of officials and media paused to contemplate a cracked window at one of the stores.

But what about KZN, where mall after mall and warehouse after warehouse have been razed to the ground? What about KZN, where there is reason to believe that this was just phase one of whatever the plan is. And if you’re really thinking clearly, you should already be worrying about what’s coming next if Zuma is not released.

And if he gets released, that will of course only plunge us into whatever crisis that represents too, because we will be left secure in our abject insecurity that the real seat of power lies not at the Union Buildings anymore, but under a thatched roof at Nkandla.

And if that’s the truth, as Ramaphosa in his complete and utter pathetic response seems determined to allow it to be, then we are even more fucked than we thought.

Because Jacob Zuma himself, not Cyril Ramaphosa, may be the only man alive in a position to save us from the supporters of Jacob Zuma.

NPA doctors say Zuma is fit to stand trial, so why isn't he in court?
40 mins ago
40 mins ago

NPA doctors say Zuma is fit to stand trial, so why isn't he in court?
40 mins ago
40 mins ago