'It gets so painful. Sometimes this growth gives me headaches or swells up until my right eye is completely closed.' 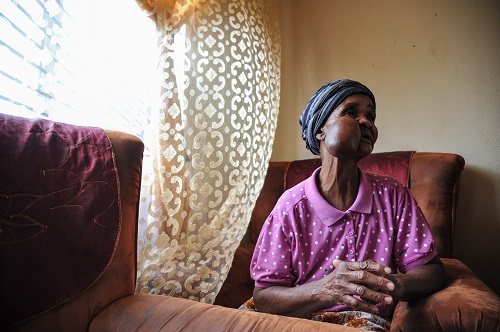 Lizzy Mokone pses for a portrait in her home in Danville, 3 January 2017, Pretoria. Picture: Jacques Nelles

An elderly woman living with a painful growth on her face was terrified of surgery as she feared to die, leaving her four grandchildren with no guardian.

Lizzy Mokone, 69, said the growth started as a small pimple about 12 years ago, but began to grow until it covered almost her whole face.

The grandmother, who is the only breadwinner looking after four grandchildren, said she went to a clinic, which referred her to a local hospital for tests and assessments. She said doctors advised her to remove the growth through surgery.

Mokone, who is illiterate and living in an RDP house in Danville, Pretoria, said she could not understand the cause of the growth, but opted to consult a few traditional healers.

“One of the prophets at my church said it was witchcraft and a traditional healer warned me that should I go for surgery, I could die. I do not want to leave my grandchildren, as I am all they have. I know I will die some day but all I ask is for God to give me more time,” she told The Citizen on Tuesday.

Mokone has been taking care of her grandchildren, aged between 8 and 17, since their birth, as their mother was in and out of Weskoppies Psychiatric Hospital.

She said the four children depended on her pension and child grants.

“It’s hard. I have to take all four children to school and my pension money can only cover transport. Their uniforms and books are so expensive and with this painful growth, it has been hard for me,” she said with tears in her eyes.

“It gets so painful. Sometimes this growth gives me headaches or swells up until my right eye is completely closed. My biggest fear is to leave these children with no one to take care of,” she told The Citizen.

Mountain biking for beginners: What you need to know from two experts
4 days ago
4 days ago
PREMIUM!

Mountain biking for beginners: What you need to know from two experts
4 days ago
4 days ago
PREMIUM!