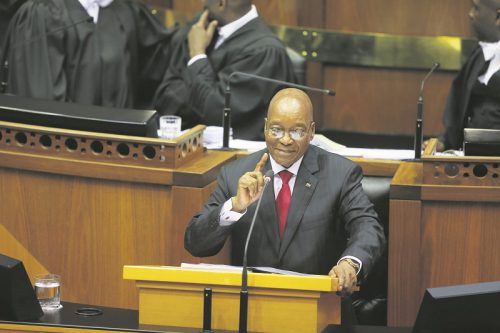 South African President Jacob Zuma gestures as he delivers the speech for 2017's State Of the Nation Address(SONA), on February 9, 2017, at the Parliament in Cape Town.

In his State of the Nation address on Thursday night, Zuma said radical economic transformation meant fundamental change in the structure and system of ownership, management and control of the economy in favour of, particularly, poor South Africans.

Political economy analyst Zamikhaya Maseti said that this would not be possible if SOEs remained in financial dire straits. He said radical transformation was only  possible if the state played a developmental role.

“What we need is a state that will intervene decisively in the economy and that intervention has to do with how you manage your SOEs like Prasa. You cannot have what is happening at Prasa, SABC and Eskom where there is daylight looting of finances, so part of that intervention is to maximise on those areas where the state has direct control.”

Part of the exaggerated growth that has been seen in Asia could be attributed to the restructuring of SOEs. “But, in our case, they are being looted by the political and economic elite and are all connected to business predators.”

READ MORE: Radical transformation of the economy is a farce, says AfriBusiness

Zuma also announced, following the deaths of 94 mentally ill patients in Gauteng, that he would award certain administrative powers over provincial health departments to Minister of Health Aaron Motsoaledi.

Political analyst Roger Southall said he was quite happy with the extension of certain powers of the provinces to the minister because he believed the provinces have had some serious failures in providing health services.

“But I think this was clearly brought on by the report on Esidimeni,” said Southall.

Weighing in on Zuma’s emphasis on radical land reforms, Southall warned of the danger of moving too fast.

“On the land issue, firstly, land is an extremely complicated issue and I rather think government taking greater powers doesn’t really solve the issue,” he said.

He also criticised government for being slow on land reform.

“What’s going on with land, as far as I understand, is that government has been fiddling with policy and white papers on land over the past 20 years and haven’t really been able to follow up on  promises and have failed in their implementation.”

Zuma also announced that government participation in the mining industry would be strengthened, with a Bill that would create a standalone government-owned mining company, the Mining Company of South Africa.

Southall said that this could only benefit South Africans as government has been too easy on mining companies.

No load shedding for City Power customers, says utility
3 hours ago
3 hours ago

No load shedding for City Power customers, says utility
3 hours ago
3 hours ago