Nehawu workers in department of social development go on strike

Nehawu’s parent body, Cosatu, has thrown its weight behind the indefinite strike. 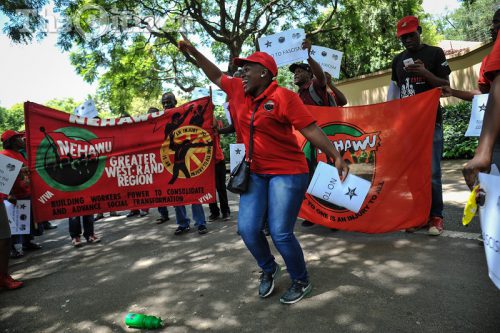 With less than three weeks to go before social grants and pension beneficiaries are due to receive their monthly payments, the department of social development is facing an indefinite strike by about 6 000 employees.

The strike is under the auspices of the National Education, Health and Allied Workers’ Union (Nehawu).

“The strike will have a negative effect on the payment of social grants and if the employer does not come back to us with a satisfactory response, the strike will remain indefinite,” Xaba said.

Nehawu said on Monday it was in the process of consulting its members from Sassa over long-standing demands that have not been addressed by the employer.

“Our members are already calling for a total indefinite shutdown of Sassa and the union is considering this option.

“We are now calling for all our members and all social development employees to come out in support of their legitimate demands and their fighting union.”

Nehawu’s parent body, Cosatu, has thrown its weight behind the strike.

“We support Nehawu’s resolve in attending to the issues of the workers and also for incorporating broader social issues in their fight,” said a Cosatu statement.

“Workers should realise that they will lose those rights if they do not defend.

“Cosatu calls on the leadership of the department to [accept] the fair and reasonable demands of the workers.

“It is not acceptable that the department has been dragging its feet since August 2015, when these demands were first brought to their attention.”

The strike threat comes as Minister Bathabile Dlamini is expected to appear before the Constitutional Court tomorrow amid reports that verbal consensus has been reached for a new contract between Cash Paymaster Services (CPS) and Sassa.