This after the duo's meeting with community members failed to materialise. 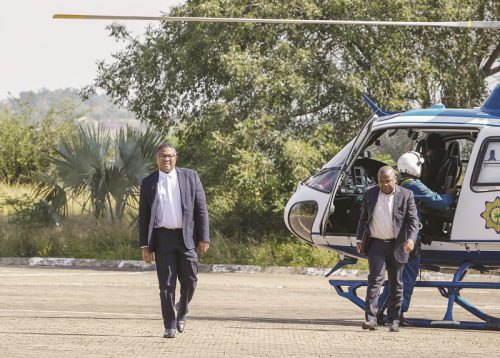 Picture for illustration. Minister of Police Fikile Mbalula arrives by helicopter in Vuwani after protests over the merging of the community into a new municipality have brought daily activity to a standstill, 20 April 2017. Picture: Yeshiel Panchea

A community meeting which was scheduled to be addressed by Minister of Police Fikile Mbalula in the troubled area of Vuwani, in Limpopo, on Thursday failed to take place.

Upon arrival in the area, the two ministers – who were flown by a police helicopter – had a brief chat with members from the SA Police Service (Saps) at the Vuwani police station.

Members of the media were told that Mbalula would address local residents at a nearby community hall once his meeting with local traditional leaders was concluded.

However, just after 3pm, vehicles that were already at the community hall were seen leaving the premises, which had all its doors closed.

There was no sign of community members at the hall in question.

Mbalula did not waste time after the meeting with the traditional leaders, saying he had to rush elsewhere.

The ministers’ visit came in the wake of tense protest action in the area, which has already claimed the lives of two people, who were killed earlier this week after the car in which they were travelling in slammed into a pipe used to barricade one of the roads.

Addressing the media earlier in the day, van Rooyen said the most troublesome village in Vuwani was Vyeboom.

“We have managed to get to a point where we know Vyeboom is the only area where we need to spend a lot of our resources in terms of unearthing these so-called anarchists,” he said.

Meanwhile, spokesperson for the Pro-Makhado Demarcation Task Team, Nsovo Sambo, said the ministers’ visit to the area was a clear indication that the government intend to silence the protesting residents of Vuwani.

“It is a sad day for South Africans as the apartheid systems and tactics are still being used to silence the people of Vuwani.

“However, we are not worried and our position remains that the shutdown of services will continue until our demands are met,” Sambo said.

While the area appeared calm for the better part of on Thursday, there were still reports of protesters hurling stones at passing motorists.

There was also a huge police presence in the area with some officers seen conducting stop-andcheck operations on most vehicles entering and leaving Vuwani.

One of the protesters, shop owner Lucky Netzenze, said although he was losing a lot money due to the shutdown, he supported it.

Residents have been demanding the Municipal Demarcation Board (MDB) reverse its decision to merge Vuwani with Malamulele and other surrounding villages to form a new municipality.