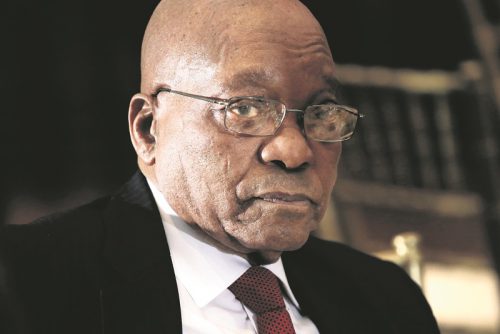 The collapse of a Workers’ Day rally in Bloemfontein in the Free State yesterday, where ANC President Jacob Zuma was booed and shown the door, should serve as a “wake-up call” and showed signs of a crumbling ANC-led tripartite alliance.

“I think it’s sad, it’s really sad,” said Nzimande. “I think we should really see this as the ultimate wake-up call because if we don’t arrest this, we will be judged harshly as the generation of leaders who allowed the alliance to collapse … but we are still going to discuss this matter properly…”

The rally ended abruptly after Zuma arrived to boos and heckling from members of the Congress of South African Trade Unions’ (Cosatu’s) affiliate unions. Zuma was meant to speak but Cosatu decided against his speech and those of other alliance leaders due to the anti-Zuma sentiment.

Marshalls had their hands full trying to break up physical altercations between pro- and anti-Zuma supporters. Police had to stop union members from pushing through a barricade between the crowd and the marquee where the president was seated.

“The workers’ rebellion at the May Day event is a clear indication that S’dumo Dlamini has no control of the affiliates,” Maseti said.

Although some affiliates made their views known and advised Cosatu that they did not want Zuma to address the rally, Dlamini did not listen, he said.

“I guess he was showing some strength and control. Unfortunately, his credibility is now shredded,” Maseti said.

Somadoda Fikeni, another analyst, said both the ANC and Zuma were to blame for the chaos.

“Cosatu leadership should have advised the ANC to send someone who was seen as neutral. The ANC sent Zuma to the rally, which resolved that they have no confidence in him,” Fikeni said.

ANC spokesperson Zizi Kodwa said the booing was not only an embarrassment to the ANC, but to the entire alliance.

“It is unfortunate that on this important day of the workers the incidents could happen. This day could not be reduced to an individual because of political preferences.”

Kodwa said the problem manifested because of premature pronouncements of leadership preferences by some alliance members.

“We need to go back as the alliance partners and ask ourselves what went wrong. We have a collective responsibility to unite our movement.”

Zuma was not the only member of the ANC top six to receive a cold reception at Workers’ Day rallies. ANC chairperson Baleka Mbete, who was addressing a rally in KwaZulu-Natal, and the party’s deputy secretary-general, Jessie Duarte, who was deployed to Limpopo, were also booed.

Duarte was booed at the Peter Mokaba Stadium in Polokwane. The Limpopo rally went ahead without her speaking after angry Cosatu members warned all “Zuma-supporting” leaders not to speak in the province in future.

Duarte and Water and Sanitation Minister Nomvula Mokonyane are seen to be die-hard Zuma supporters, who have been drumming up support for his former wife, Nkosazana Dlamini-Zuma, to succeed him as ANC president. Limpopo supports Ramaphosa.

READ: WATCH: Workers chant ‘We heard the good news that Zuma is going’

Tinyiko Maluleke, another expert, said the chaos at the rallies marked the manifestation of divisions in the ANC-led alliance and within Cosatu itself.

Two of the federation’s major affiliates – public sector union Nehawu and the Communication Workers’ Union – told Cosatu they opposed its decision to invite Zuma to the rally.

Cosatu president Dlamini yesterday told The Citizen they had no choice but to cancel the speeches and close the rally due to “disruptive behaviour” by some workers.

“It was clear they were not prepared to listen.”

“This was actually planned, staged to embarrass the whole leadership. There are people who have planned it. I’m told by some comrades here that people who are even more vocal and disrupting this [gathering] are not from this province. We have taken our own videos, we will be analysing. Tomorrow, we are meeting with the alliance officials,” said Magashule.

Cosatu in Gauteng used the day to vent its anger on the lack of transformation in the private sector. The federation staged a protest march to the JSE in Sandton, where it presented a memorandum of demand calling for transformation of the economy.

The federation demanded that the JSE should produce a programme to transform itself.