The state security ministry has reportedly dismissed the report, saying it could have been written by anybody. 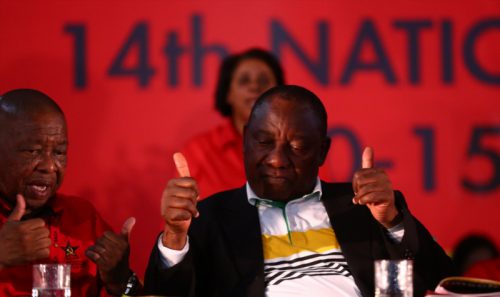 BOKSBURG, SOUTH AFRICA – JULY 12: ANC Deputy President Cyril Ramaphosa and SACP General-Secretary Blade Nzimande during the South African Communist Party’s 14th national congress on July 12, 2017 in Boksburg, South Africa. During his speech, Ramaphosa criticized the Gupta family and those in the ANC’s ranks who collaborate with them. (Photo by Gallo Images / The Times / Masi Losi)

The purported report follows a vote of confidence in President Jacob Zuma, in which about 30 ruling party MPs are suspected to have voted with the opposition to remove Zuma from power.

Zuma has himself over the weekend joined other senior ANC leaders in calls for supporters of the motion against him, particularly ANC national disciplinary committee chairperson and former minister of tourism Derek Hanekom, to face disciplinary action.

This prompted former chief whip Dr Mathole Motshekga to remind Zuma and treasurer-general Zweli Mkhize, who supported the call, that the ANC itself was “not above the constitution” over the weekend.

While it is not explicitly clear what the alleged “surveillance report” aimed to achieve, the undertone suggests a nefarious plan to destabilise Ramaphosa’s campaign by targeting key members of his presidential campaign team.

Requesting that it be kept “highly confidential”, the authors allegedly suggests Sars, State Security Agency and Financial Intelligence Centre “must zero in on the campaign kingpin, Marion Sparg. Furthermore we request to obtain permission to embark on a surveillance operation around Sparg, as she will lead us further”.

Marion Sparg is a former uMkhonto weSizwe (MK) operative and former chief executive of the now-defunct Scorpions. She was previously reported in a Sunday Times report as part of an “all-white team” of the campaign strategists who were frustrating nonwhite team members, a claim dismissed by the campaign team spokesperson.

In an emailed response on August 2, the campaign’s media team forwarded the following response: “The CR17 campaign team – which brings together like-minded individuals to support the candidature of Cyril Ramaphosa as the next ANC president – takes extreme exception to claims made in an article in the Sunday Times.

“The claims about the management of the campaign in the article titled ‘bossy whites anger Cyril backers’ are inaccurate, insulting and racist. For the record, the CR17 campaign consists of South Africans of all races from across the country,” the response read in part.

The email response also stated the campaign was overseen by a political committee of senior ANC leaders at the national and provincial levels.

“There are 12 people in the national management team, all of whom have a long history of service to the ANC and the country. The campaign is assisted by a number of volunteers and service providers who together represent a cross-section of South African society,” the response continued.

State Security Minister David Mahlobo spokesperson Brian Dube is quoted as having rubbished the report, arguing: “This poorly worded document [which is] full of grammatical errors, could have been written by anybody.”