Meter taxi drivers claim they live in fear of the ‘EFF’

The drivers allege men in 'EFF regalia' have threatened those who won't attack Uber drivers. The party says they're imposters. 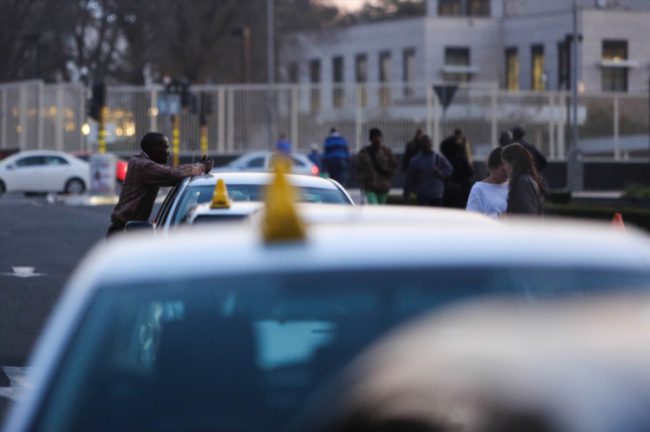 Tshwane meter taxi drivers are living in fear of assaults after a group of unlicensed drivers claiming to be members of the Economic Freedom Fighters (EFF) allegedly forced them to join their fight against Uber.

According to former members of the Tshwane Meter Taxi Council, the group, often dressed in EFF regalia, have threatened meter taxi drivers who reject their commands to attack Uber drivers. The same group was also allegedly responsible for violent attacks on Uber drivers in Pretoria.

One of the drivers, who wished to remain anonymous for fear of victimisation, said the group had assaulted him at the office of the transport department in May when they planned to discuss the challenges in the industry with Minister Joe Maswanganyi.

Footage taken from a meter taxi rank in Sunnyside surfaced, showing three men, dressed in red hats and a red hoody, aggressively speaking to taxi drivers who had ranked on Robert Sobukwe Street. Since then, the driver has not returned to the rank.

“They have been collecting R400 from each meter taxi driver, claiming they need to raise R400 000 to pay Advocate Dali Mpofu, who “will help them get rid of Uber”.

But Mpofu rubbished the claims, saying such allegations against him were “nonsense” as he had never received any money, and would not do so.

“They are just taking advantage of people’s ignorance. I am not involved at all. They are just abusing my name and that of the party. This is obviously a scam. They must not give them any money,” he told The Citizen. – rorisangk@citizen.co.za

EFF, ANC gun for Western Cape
3 days ago
3 days ago

EFF, ANC gun for Western Cape
3 days ago
3 days ago