There have been tensions between Uber and metered taxi drivers that resulted in several assaults and even murders. 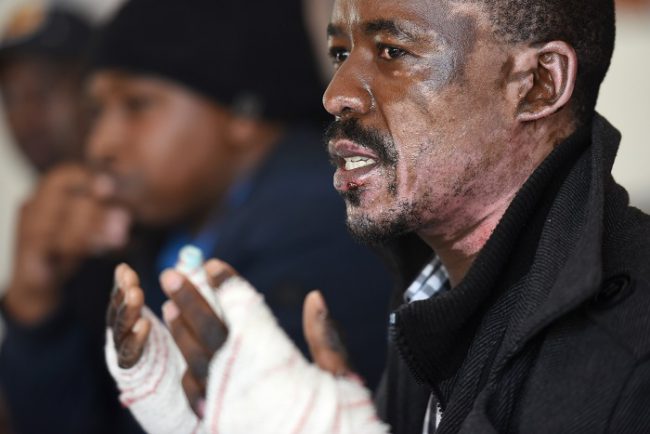 Uber driver Kgomotso Tiro, who was assualted by an unknown passenger with acid and was later set alight shares his ordeal with members of the media in Johannesburg, 22 August 2017. Picture: Refilwe Modise

A mobilisation of Uber drivers called The Movement has welcomed the on-demand taxi service’s announcement that it plans to put in place identification measures for riders to ensure all-round safety.

This after a number of attacks had surfaced in recent weeks against Uber drivers amid ongoing tensions with the metered taxi industry and concerns over hijackings and robberies.

“We look forward to their announcement and we hope that it will include positive ID of riders, as well as picture verification,” The Movement’s Teresa Munchick said.

“We hope this is announced soon as the hijackings, robberies at gunpoint and now acid attacks and being set alight, occur weekly.

“We are pleased they have realised some action must be taken.” This week, Uber driver Kgomotso Tiro divulged his horrific ordeal when he was set alight by a “passenger”.

Uber have since announced an arrest has been made in the case. “While I was burning, he was laughing. He was a white person,” Tiro said.

He lay blame on Uber for not making it compulsory for riders to add a picture as a method of identification for drivers – and pointed to cash trips being risky to accept.

Uber recently added cash as a method of payment, away from its usual card policy, which is used to deduct money for the trip from the user’s bank account. This, drivers say, further endangers their lives with no way to trace back a rider.

On the sidelines of a press conference yesterday, Uber general manager for Sub-Saharan Africa Alon Lits said: “We are looking at ways to improve rider verification for cash trips. “Cash is not a new innovation. It’s ubiquitous in Africa. It’s the way which the transport industry is operated.”

With regards to Tiro’s claim that he plans to repay an amount of R39 000 from Uber as he felt it was used by Uber to keep him quiet, Litz said the money was a “goodwill gesture”.

“We hopefully will meet with Kgomotso soon to understand where this breakdown happened. And why he feels we didn’t do enough. We are always looking at ways to improve. We do feel we have been there to provide the support to him and his family.” – yadhanaj@citizen.co.za