The party says the city should also deploy the bicycle unit at Bosman Gautrain station. 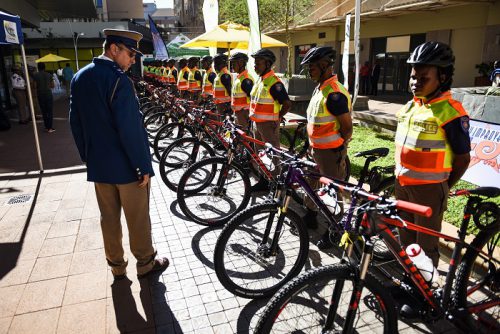 Metro police officers are seen at a shopping centre in Hatfield during the launch of a new TMPD bicycle unit, 13 September 2017, Pretoria. Picture: Jacques Nelles

ANC caucus spokesperson Lesego Makhubela said: “Hatfield is a predominantly white area that houses the University of Pretoria, which has the highest concentration of white students and a whites-only student residences.

“Hatfield, even without the bicycle unit deployed by the racist DA government, with a puppet at its helm, is already a fortress endowed with cameras and a high, private security presence,” Makhubela said.

He said the robberies and criminal activities reported in Hatfield were nothing compared with the crimes reported in Arcadia, Sunnyside and all the major parts of the inner city.

He said these areas were all predominantly black areas. He said they also needed a bicycle unit deployed at Bosman Gautrain station and for the city to stop towing away cars that were parked outside the station.

He said students at Tshwane University of Technology (TUT) and Unisa, the various private colleges in and around the city and primary schools, deserved the same privilege and protection.

He said the DA aimed at creating a scenario of “Camps Bay and Khayelitsha, a replica of the DA-led Cape Town municipality in which whites in Camps Bay live in safety and comfort because of the city spending to protect their privileges and the people in Khayelitsha, black people, are victims of violent crimes”.

According to the university, more than 60% of its students in university residences are black.