Parliament's committee on education and recreation says the alarming cases of sexual assault and rape against pupils require immediate action. 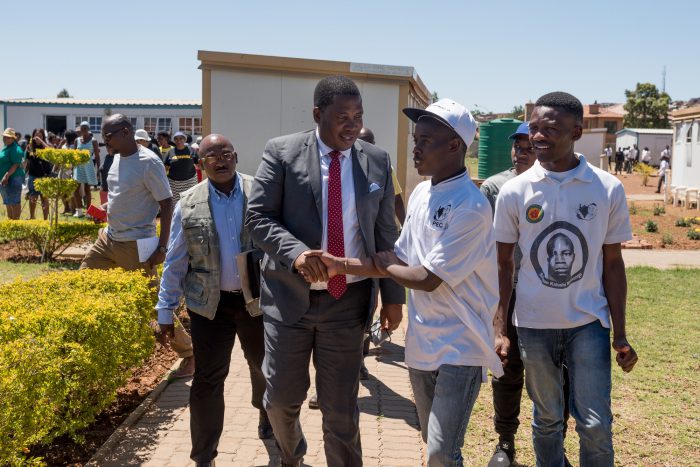 Gauteng education MEC Panyaza Lesufi speaks with members of COSAS after a media briefing at Mahlube Secondary School in Mamelodi East on 16 October 2017. The MEC's visit follows an alleged sexual assault of a pupil of the school by one of the school's private security guards. Picture: Yeshiel Panchia

Sexual violence against pupils at schools has reached disturbing levels with calls for better safety measures to be put into place to safeguard children.

Several cases of alleged rape against female pupils came to light this week following a shocking report that a scholar patroller at AB Xuma Primary School in Soweto had sexually assaulted as many as 87 children.

The incidents resulted in parliament’s committee on education and recreation urging the education department to strengthen verification procedures with the National Register for Sex Offenders to ensure children are protected from known offenders.

“Adults who are found to have committed these vile, criminal acts must be removed from the teaching profession and the society of children,” committee chairperson Lungelwa Zwane said.

“The alarming cases of sexual assault and rape against pupils require immediate action.”

The alleged perpetrator was a member of the Community Policing Forum (CPF), who attended the matric dance held in Bronkhorstspruit.

But the man was apparently not on the guest list. School principal Thoko Zikhali confronted the man when he came in.

“I asked how he came in. But we were busy with the formal session so our focus was on the function. He was not with the pupils but spent the evening with the teachers,” she said.

It was only at 2am after a roll call that teachers noticed the alleged victim was missing.

Lesufi said the school’s report indicated that the alleged rapist had actually booked a separate venue closer to the dance.

“The teachers were told that the pupil would be that side. The guy was caught in the act. That is the part that shocked me,” the MEC said.

But the matric pupil and the CPF member at the time both denied anything took place between them. The pupil only made her confession to Zikhali last Monday when school reopened. Zikhali said she notified the girl’s parents, despite the pupil being against it.

Lesufi said another rape had emerged at a school in Benoni, on the East Rand, which he then rushed off to visit. In Limpopo, a 51-year-old teacher was arrested for allegedly raping a 14-year-old girl.

The alleged incident occurred on Friday in the teacher’s car at the side of the road while the child was returning home. Police spokesperson Lieutenant-Colonel Moatshe Ngoepe said the girl attended a school in a village near Tzaneen.

The girl was travelling from school in the teacher’s car, when he offered to buy her something at a shop.

Last week, a 45-year-old teacher in a Lebowakgomo school appeared in the town’s magistrate’s court for sexually assaulting a 15-year-old girl. The DA called on Gauteng Premier David Makhura to urgently appoint a commission of inquiry into sexual abuse at schools.

“A full-blown inquiry will be able to thoroughly investigate known and unknown abuse cases in our schools and provide substantial solutions,” the DA said.

“She is only a minister by title. So much has happened under her leadership. “All stakeholders involved cannot allow this crisis in our schools to continue.

“It is time for them to have an urgent meeting and find permanent solutions to these problems which affect our children’s and our country’s futures,” the organisation said. – news@citizen.co.za