The rot at Eskom was exposed yesterday for all to see – and for civil society to ask the National Prosecuting Authority: what more do you need to act? 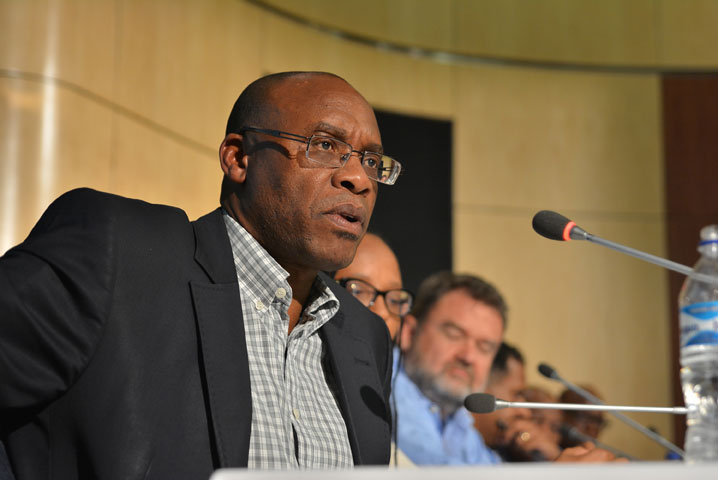 Tshediso Matona, former Chief executive of Eskom discusses the collapse of a soil in Majuba powerstation which caused massive black out around many parts of South Africa on 2 November 2014. Eskom held an impromptu media briefing, at megawatt park in Sunninghill, where Eskom shed some light upon massive black out. Picture: Valentina Nicol

Matona yesterday told parliament’s public enterprises committee, conducting an inquiry into state capture at state-owned enterprises (SOEs), that there had been deep infighting among the Eskom board during his tenure as CEO, from October 2014 to March 2015.

In presenting evidence to the committee, Matona said that a day before he was suspended, he
was asked to leave a board meeting by Public Enterprises Minister Lynne Brown – and that was
when he realised “something was amiss” within the power utility.

We are not surprised. More revelations are coming out of a defunct organisation that is being captured

That meeting, he said, saw the then and new Eskom board asking for an inquiry into dealings at the
utility. This had been conducted but the report was never released.

Following his evidence, the Organisation Undoing Tax Abuse (Outa) called for Brown to be taken
to task for not addressing all the issues at Eskom “We are not surprised. More revelations are coming out of a defunct organisation that is being captured,” Outa chairperson Wayne Duvenage said.

“This is part of the captured strategy of the connected people to the president and the plundering
that took place. It is also the enabling of Gupta-related organisations to benefit from stateowned
entities, which is more proof this occurred,” he added.

He added that while there were those who had already been fingered in the looting that was state
capture, there were some still working at the power utility who needed to be brought to book.

“Minister Brown is now part of the problem. She’s not taking action. She took a long time to
act and had a lot of evidence and information to fire Brian Molefe, Mochela Koko, Anoj Singh, Ben
Ngubane … all of them!

“It took relentless exposés … but there are still more people that are there and that shouldn’t be there. She is not taking the hard action that she has to take.

“In this case, Brown is implicated and she is part of the problem. I think if we had a president that was worth his salt, he would take action against her.”

But he would not, Duvenage added, “because he is keeping his people who are looking after his connected cronies in power so they slow down the process of investigation and the action that
should be taken”.

Duvenage said looting within SOEs and the recent R50.8 billion revenue shortfall announced by Finance Minister Malusi Gigaba translated into a society that was not comfortable with state institutions such as Eskom and the South African Revenue Services.

Gigaba yesterday announced he had appointed a tax administration and governance inquiry into Sars.

“Nothing is done to curb these expenses, questioning them and go right to the source. “This is the work that [former and deputy finance ministers] Pravin Gordhan and Mcebisi Jonas had been doing. That good work has slowed right down. And now we have a minister who pays lip service.”

Former Eskom executive Erica Johnson told the committee she was disturbed by a New Age breakfast media deal which would have eventually cost R14 million per year.