Pretoria fire expected to continue into the weekend

It is suspected the cause of the fire was the spontaneous combustion of waste due to a combination of the high temperature in the core of the 3m-high waste heap. 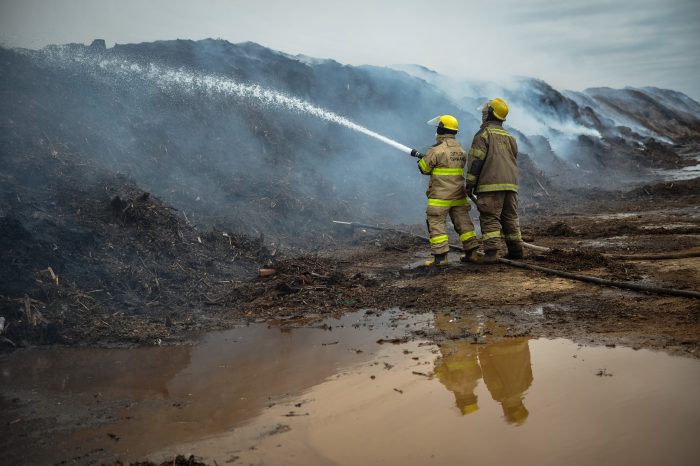 Firefighters are seen spraying water on to some of the smouldering compost at the Gartskloof Landfill site in Pretoria East, the compost heaps caught fire on Monday and will take more than a week to douse the smouldering heaps, 9 November 2017, Pretoria. Picture: Jacques Nelles

The heavy smoke hovering over parts of Pretoria East from a burning compost landfill is not toxic and it is expected to continue giving off fumes into the weekend, according to City of Tshwane’s emergency services.

More than 100 emergency services personnel were still fighting the blaze at Gartskloof landfill site in Elardus Park yesterday, after the compost landfill was engulfed in flames on Sunday.

It is suspected the cause of the fire was the spontaneous combustion of waste due to a combination of the high temperature in the core of the 3m-high waste heap and the recent scorching weather.

Emergency services chief Previn Govender said that when the combustion process reaches the surface of the waste heap and is exposed to oxygen, flames break out.

“Because it’s garden refuse, the smoke is actually produced from organic combustion, so it is not toxic smoke.

“It will obviously be a nuisance to the community, especially people who have respiratory problems like asthma. They could be impacted by the smoke but in terms of health risk, it is not toxic,” Govender said.

Residents from Menlyn, Lynnwood and Moreleta Park have taken to social media to complain about it, with some claiming it is causing children and the elderly to get ill.

After visiting the site yesterday, Tshwane acting mayor Cilliers Brink said a mobile clinic was set up at the Erasmuskloof fire station to treat residents affected by smoke inhalation.

Tents were also erected at Sports Park in Lyttelton, Centurion, for residents who need a place to sleep overnight to escape smoke inhalation.

“We understand the situation here is causing anxiety in the surrounding community. We appeal to the residents not to panic,” Brink said.

It is anticipated the fire would be extinguished by Monday.

“Our agriculture and environmental management department will immediately conduct an assessment of all the landfill sites of this nature to anticipate and prevent this happening again in future,” Brink added. – rorisangk@citizen.co.za