This would ensure a peaceful transition of power, says Holomisa. 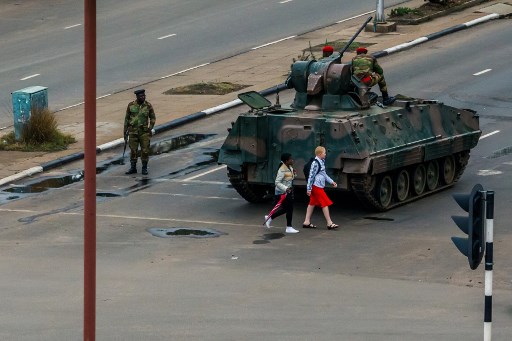 Young women walk past an armoured personnel carrier that stations by an intersection as Zimbabwean soldiers regulate traffic in Harare on November 15, 2017. Zimbabwe's military appeared to be in control of the country on November 15 as generals denied staging a coup but used state television to vow to target "criminals" close to President Mugabe. / AFP PHOTO / -

The Zimbabwean Defence Force (ZDF) must use its power wisely and suspend the country’s constitution to guarantee their own immunity from the courts, says UDM leader Bantu Holomisa.

This would ensure a peaceful transition of power, said Holomisa who, himself, once led a coup, which overthrew the government of the Transkei Bantustan in 1987.

As President Robert Mugabe and his wife, Grace, remained under house arrest yesterday, peace talks were under way between Southern African leaders and the military in the capital, Harare.

Several officials, including three ministers, were arrested. While Holomisa maintains that the Mugubes’ safety was unlikely to be an issue – should the president step down peacefully – the Zimbabwean Communist Party said his fate would depend on the attitude of the ZDF.

The military also needed to justify its intervention, Holomisa said, noting their actions were both unlawful and unconstitutional.

“They need to assure the people that the rule of law is guaranteed in terms of police and that the courts can continue to do their work as they have been doing. There must be no military courts.”

Ngqabutho Mabhena, general secretary of the ZCP, said: “It appears the interim government will be controlled by the military. We are not sure yet who will constitute that government.”

Ramaphosa too is reading ‘The President’s Keepers’