Protest as Taxify killers still on the loose

Hundreds of TUT students and e-hailing taxi drivers took to the streets to demand action against taxi violence from the transport minister. It’s a week since the brutal murder of young Taxify driver Siyabonga Ngcobo and his killers have not yet been arrested.

Hundreds of Tshwane University of Technology students, Uber and Taxify drivers marched through the streets of Pretoria yesterday to the site where the 21-year-old’s body was found burnt beyond recognition in the boot of a car.

Led by social justice movement #NotInMyName, many displayed outrage at the brutal killing, calling on law enforcement to act speedily.

“We are here specifically to cry for justice for Siyabonga. We are calling on law enforcement to act with speed and accuracy.

“We can’t wait another week with Siyabonga’s murderers still out there. We need social justice in South Africa and we won’t stop until that happens,” #NotInMyName movement’s secretary general Themba Masango said.

Ngcobo, a fourth-year sports management student at TUT, was attacked last Friday by a group of people when he picked up a commuter in Arcadia. His passenger was pulled out of the car and he was thrown in the boot and the vehicle was set on fire.

Trapped inside, he was burnt beyond recognition. His body was found in the boot of the Taxify vehicle near the Unisa Sunnyside campus.

Flowers and candles were laid on the ashes of the week-old crime scene yesterday as hundreds of students gathered to remember their peer.

Drivers are now living in fear, an Uber and Taxify driver told the Saturday Citizen yesterday, as government’s investigations into the violence continue.

As a victim of an attack at the OR Tambo International Airport last year, Koketso Lentsoane warned his colleagues to be wary when picking up a passenger, as attackers pose as commuters.

“Don’t be scared to tell your rider to sit in front next to you. Sometimes a person gets in the back of the car, but they are intending to attack you. If they sit next to you, you can fight back,” he said.

Lentsoane commended Uber for improving their security, but said Taxify needed to put measures in place for driver safety.

“We haven’t seen effort from Taxify. There is an improvement from Uber, but we need Taxify to up their safety levels.

“We also send a message to Transport Minister Blade Nzimande to take action. We are tired of incomplete investigations. Action needs to be taken now.” 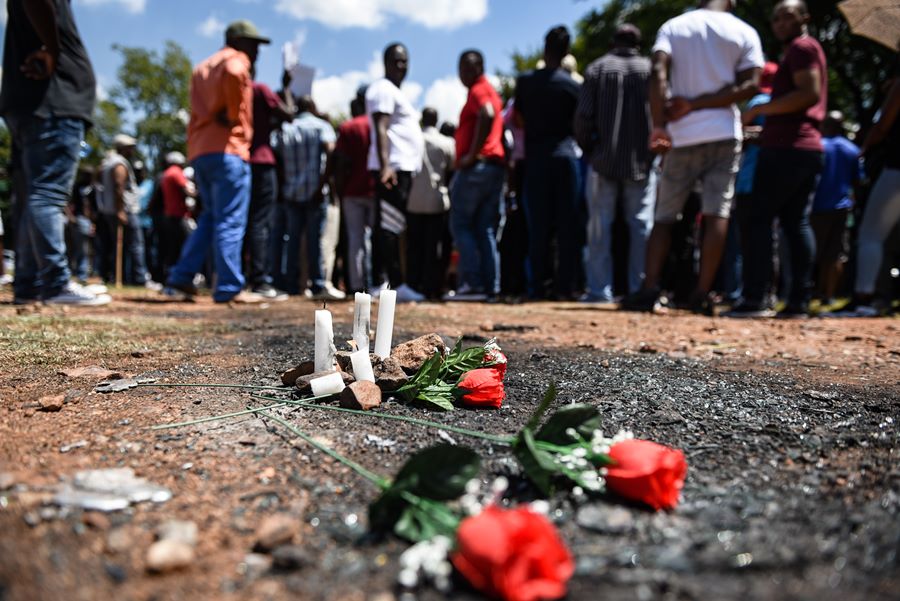 Candles and some flowers are seen near where Taxify drivers, Uber drivers and TUT students gathered at the site where Siyabonga Ngocobo’s burnt body was found. Picture: Jacques Nelles