Malema says the land is going to be expropriated 'whether white monopoly capitalists like it or not'. 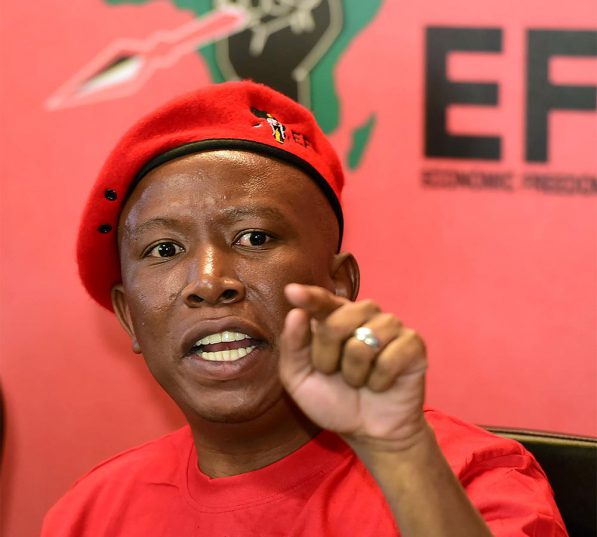 Malema said Ramaphosa had been a coward by refraining to elaborate on the compensation issue with regards to the expropriation of land when the president spoke at anti-apartheid activist Winnie Madikizela-Mandela’s funeral.

“Our deputy president [Floyd Shivambu] questioned Ramaphosa regarding the land and Ramaphosa says that we took that directive from the resolution that they [ANC] made at Nasrec. Which is a lie,” Malema said.

[What]: DP @FloydShivambu asking President Ramaphosa to be clear on whether or not we are going to expropriate land without compensation #RamaphosaQandA pic.twitter.com/4gEpKIKDWY

Shivambu posed the question to Ramaphosa during the president’s question and answer session on Tuesday, asking whether expropriation of land without compensation would continue or not.

The president’s response led to an argument over whose idea expropriation is which resulted in EFF MP Sam Matiase being ejected from the National Assembly.

Matiase had said Ramaphosa was deliberately misleading parliament and the public by claiming the EFF was taking its cue from the ANC regarding expropriation of land without compensation.

At the breakfast today, Malema said once Section 25 of the Constitution has been amended, the land would be expropriated without compensation, “whether the white monopoly capitalists like it or not”.

The constitutional review committee is currently taking in public submissions on the review of Section 25.

Public hearings on the proposed changes to the Constitution to allow for the expropriation of land without compensation will be held across the country from June 27  to August 6.

Between 7 – 17 August, more public hearings will be held at parliament.

“We believe that the constitution should be written in such a simple manner that all members of society can easily understand it. It should be found in every household in South Africa,” Malema said at the breakfast today.

The EFF leader said his party has written to government departments, asking how many hectares of land they own.

“We want to prove that the rhetoric that the investors will run away if the state owns the land is a myth,” Malema said.

He said the EFF is going to release a long list of billion-dollar projects operating on state land.

“We are nationalising the land and everything that comes with the land underground,” Malema said.

The commander in chief of the red berets said the willing buyer, willing seller principle had failed because current landowners are not willing to sell.

“Patrice Motsepe and Cyril Ramaphosa will never buy land in a prime space without intervention of state institutions. Only foreigners can buy in Cape Town, what does that say for the sovereignty of this country?”

ALSO READ: The EFF does not agree with Mpofu representing Moyane