Siphiwe Primary School allegedly failed to assist the injured boy after broken glass got into his eye. 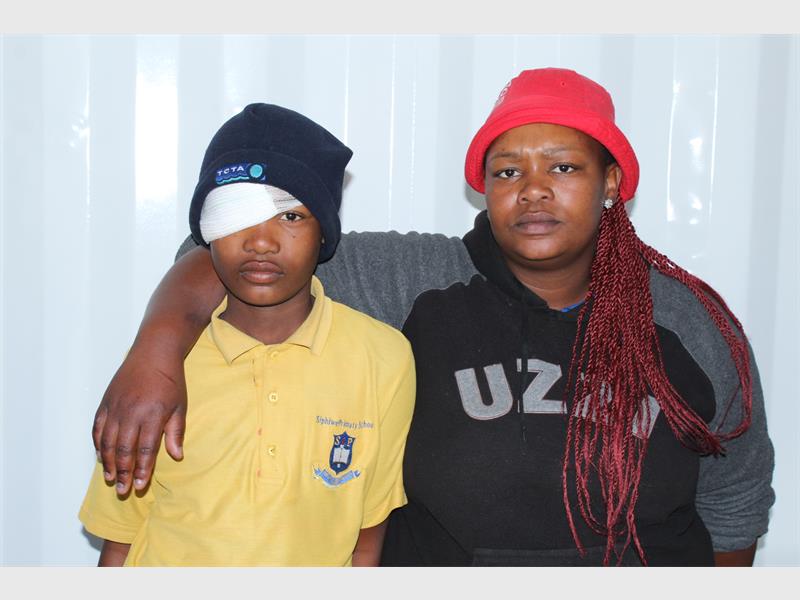 Siyanda Ngozo and his mother Jabulile Ngozo are disappointed with the department of education.

A Tembisa mother is disappointed with Siphiwe Primary School and the department of education following an accident that left her son blind in his right eye, she told Tembisan.

Jabulile Ngozo said in May her son Siyanda was standing with his friends outside a classroom when another child broke a window pane behind them.

“When my son looked back to see what was happening, a piece of glass got into his eye, and he rushed to his class teacher for help.

“My son said the class teacher told him it was none of her business that the piece of glass got into his eye. His friends took him to the office, but even there the school staff did not help him. They sent him back to the class teacher, who again refused to help,” said the mother.

She said her son arrived home after 2pm with blood dripping from his right eye. “I did not even get a call from the school informing me of the accident.

“My son was supported on both sides by his friends who explained to me what had happened,” said Ngozo.

She went to the school to find out why she was never informed and why the school failed to help her son.

According to her, the school had no explanation. She said her son’s teacher got into her car and drove off without acting on the incident.

She took her son to a nearby clinic the same day where the 14-year-old was referred to Tembisa Hospital due to the seriousness of the injury.

The following day Ngozo took the police to Siphiwe Primary School in pursuit of answers, and was told the principal was not aware of the accident.

“The school’s principal and his deputy tried to talk me out of the issue. I got no help from the school. I then took the matter to the district and someone was sent to investigate.

“That person came only once, and that was the last time I heard from them. The department of education kept quiet about the matter since then,” said Ngozo.

She said he son was operated on at Tembisa Hospital on May 11 and discharged the following day. He was instructed by doctors to try to open his eye, and he did, but he said he could not see.

“Ever since my son cannot see, and doctors never said anything about him regaining his sight.

“What pains me the most is the action of the teacher who chose to distance herself from helping my son. I am disappointed with the school as well for trying to conceal the matter.”

“I appeal to the department of education to deal with the teacher and the school for mishandling my son’s matter. I want parents to know about my son’s ordeal and that their children are not safe at the school.

Ngozo hopes for financial assistance to get specialised medical attention to help her son.

The Tembisan tried to get answers from the department of education by sending an inquiry on June 22. They had not answered at the time of going to print.