The Dutch Reformed Church backtracked in 2016 on recognising same-sex unions, 'resulting in severe emotional and spiritual harm, and even deaths'. 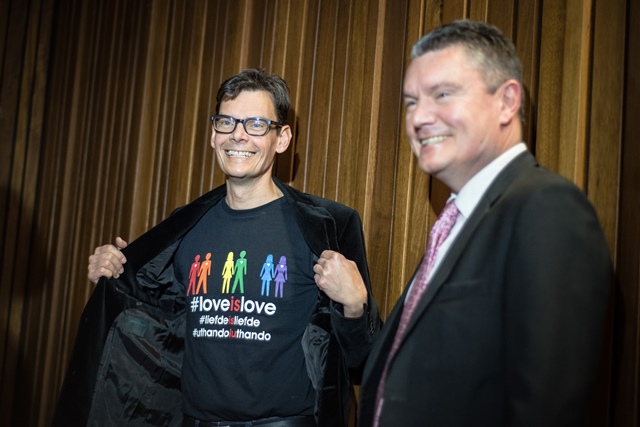 Laurie Gaum at the High Court in Pretoria where he along with his father, Dr Frits Gaum, a well-known figure in the Church, challenged the Dutch Reformed Church’s decision to go back on its word regarding same-sex unions, 21 August 2018, Pretoria. Picture: Jacques Nelles

Wearing T-shirts with the slogan #LoveIsLove, gay and lesbian members of the Dutch Reformed Church yesterday gathered at the High Court in Pretoria seeking to set aside the church’s 2016 decision not to recognise same-sex unions.

Activist Laurie Gaum, his father Dr Frits Gaum, and other church members asked the court to set aside the November 2016 decision that gay and lesbian persons could only be ministers if they were celibate and that the church ministers were not permitted to solemnise same-sex civil unions.

The decision replaced a 2015 decision recognising same-sex unions and relationships and allowing gays and lesbians to fully participate in church affairs.

A full bench of the court, led by Judge Joseph Raulinga, reserved judgment.

The applicants argued that the decision was procedurally flawed; imposed the religious beliefs of one group of the church on another; and contravened the right to dignity, privacy, freedom of religion, belief and opinion; and the right to freedom of association.

The church fiercely defended its decision, arguing that it was taken after four days of serious debate and prayer, and that it did not amount to unfair discrimination and that the court should not interfere as it would mean the church could not follow what it believed, which infringed on its right to religion.

Jeremy Gauntlett, for the applicants, argued that the church’s 2016 decision predetermined for all concerned that same-sex life partnerships were sinful, sanctionable and religiously outlawed, resulting in severe emotional and spiritual harm and culminating in deep human suffering and even loss of life.

Schalk Burger, for the church, argued that gay and lesbian members of the church could still get married and could go to another church, the magistrate’s court, or home affairs.