The three men say they were wrongfully accused and have endured months of hardship as a result. 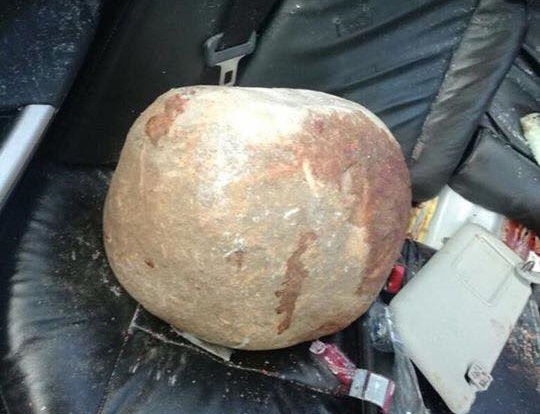 The rock which claimed the lives of Amina Haffajee and her little brother Abdur.

The charges against three men who were accused of the rock-throwing murder of two youths have been formally withdrawn, reports North Coast Courier.

Selvan Govender, 46, his son Nathan Govender, 27, and employee Qiniso Bhekithemba Gumbi, 20, were charged with causing the deaths of 16-year-old Amina Haffajee and her seven-year-old brother, Abdur, late last year, when they were alleged to have thrown a large rock from the bridge over the N2 highway between Tongaat and Ballito, striking the car.

The men had each faced two counts of murder and one of attempted murder.

“We accept this decision with muted joy and mixed feelings,” he told the North Coast Courier.

“Those endless months and days in custody can never be erased. My clients are innocent and the criminal justice system has failed them.”

Nathalal said he believed the charges were withdrawn following inconsistencies with the witness statements during the bail applications for the three men.

“The witnesses could not have seen my clients allegedly committing this act as they claimed.”

The North Coast Courier has not been able to confirm with prosecutor Carlson Govender the reason for the charges being dropped.

The father of Amina and Abdur, Ebrahim Haffajee, said from the beginning, he had merely wanted the law to take its course if they were the guilty party.

“My main feeling is, no matter what happens or what anybody does – it will not bring my babies back,” said Haffajee.

“I pray that whoever is responsible for killing my children will be caught. At the moment, I wonder if the justice system has failed us.”

During court appearances to date, investigating officer Ivan Padayachee had argued that, if granted bail, the three accused would interfere with state witnesses. At the time, it was revealed that the witnesses are minors between the ages of nine and 16.

He also told the court that the case against them was so overwhelming that they might choose to flee in an attempt to evade their trial.

Since their arrest earlier this year, the home that Selvan, a mechanic, shared with Nathan and Gumbi was vandalised. Items were also stolen from the home and the property he used as his auto shop.

The three men have denied any involvement in the incident from the beginning and claimed they were wrongfully accused.

Selvan told the court he had endured both physical and emotional trauma during his incarceration, and that not being able to work had put his family under financial strain.