Don’t tell me what to paint – Falko One 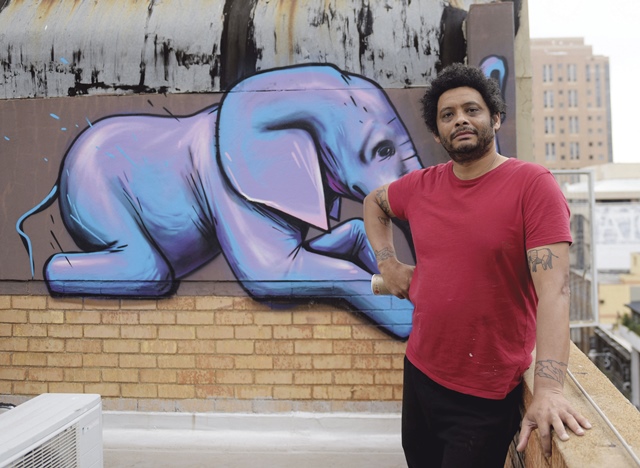 Global street artist Falko One poses for a picture at one of his trademark elephants painted on the roof of the Once in Johannesburg Hotel in Braamfontein, 15 October 2018. He has painted a herd gallery, a collection of site specific works, on the rooftop of the hotel. Picture: Tracy Lee Stark

Thus says renowned street artist Falko One. He is tired of being told to paint more “political stuff” and after 30 years in the street art industry, the Cape Town-born artist is on a mission to cement his identity outside of “the struggle”.

Four years ago, he says, “witchcraft” and serendipity colluded in providing him his reputation. He describes it as a “dumb set of circumstances” that happened in Senegal. He unwittingly offended local villagers with his images of chickens.

“I got clamped down on because they said I can’t paint chickens because it’s used in witchcraft.

“There I was, stuck in this little ghetto outside Dakar, surrounded by the community, being asked why the f*** I am painting chickens, and I thought, actually, I can paint elephants.

“And that was it. And it wasn’t intentional. But like in all good stories … necessity is the mother of invention.”

And four years later, Falko says he has painted hundreds of elephants in little towns, cities, squatter camps and suburbs. “And I’m happy. And it’s all I want to do.”

Asked what his influences are, Falko barely has to think. Forensic detective shows, criminal minds, British comedies and cooking shows. Basically “anything other than watching or reading something about art itself” – so as to encourage his lateral thinking, you see. 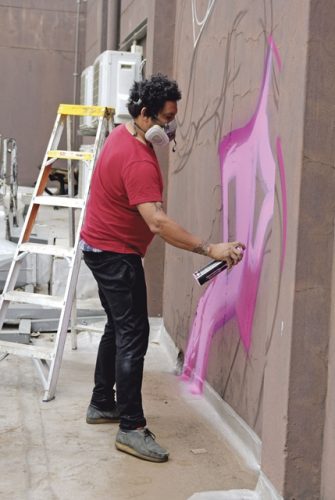 Global street artist Falko One painting one of his trademark elephants on the roof of the Once in Johannesburg Hotel in Braamfontein, 15 October 2018. Picture: Tracy Lee Stark

Falko seldom wants to tell journalists he was born in District Six in Cape Town, lest the interview deteriorates into another rags to riches “started from the bottom kind of story”.

“I try not to do that, I try to stay away from that because already if you say you’re from District Six you’re presenting yourself as ‘this person’, and I’m trying to not be classified as an artist by where I come from,” he says.

Falko has spent most of his career following trends, mimicking other artists and generally being “part of the scene”, he points out.

“As South African graffiti artists, when we travel to Europe and those places they ask us what is ‘our identity’ – and there never was one. And only now are we starting to come into its form, but for 26 years let’s just say I never had an identity, it was just about what was popular.”

Travelling across the country during his Once Upon a Town tour, Falko made a fundamental discovery – about the meaning of his ethnic identity, and why perhaps South Africans put far too much emphasis on what differentiates them from others.

Falko headed to the Kalahari in the Northern Cape in 2016 to find places to paint and to explore what he thought might be his ethnic heritage.

“It’s a complicated story, as you might know. And even among the coloured people there is division. You can tell by how I look that I’m definitely not ‘Bushman’. I have some Indian and Malay. My name is Craig Cupido and that’s as English a name gets. Cupido is f**king … Latin. Cupido was apparently some nickname the Dutch used to give their dogs,” he quips.

He says the one valuable thing he learned about the Kalahari jaunt was that he was not as native as he thought he was.

“I went there and the Bushmen were, like, this is a mixed area, it’s coloured and Bushman. And I was, like, I thought I wasn’t Bushman. I was a tourist in my own culture, [and] that was cool.”

“You’ve got to tell a story, you’ve got to shuck and jive and sell it,” he laments. “So all these people who are expecting artists to paint this, are the same people that are not f***ing buying it!”

If artists try to break away from that, they are accused of selling out, he says, whereas white artists “can paint a still life of an orange and flowers, R100,000, no explanation given”.

Falko is in his element, painting on to metal, brick and concrete a magical fever dream of elephants at play among sea creatures. And that is that.