First Akita had to battle with a Kudu bull last year, before a nasty confrontation with the king of the jungle himself. 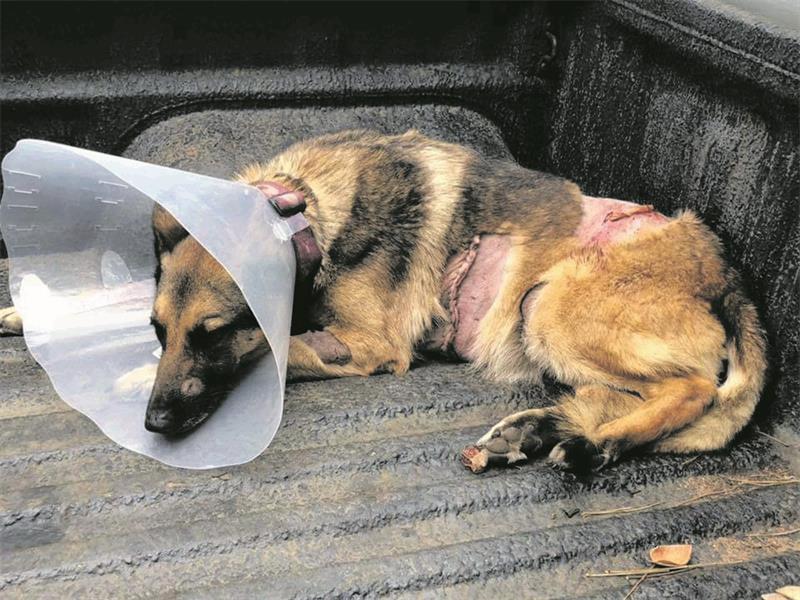 Akita shortly after she was attacked by a lion.

Strong, intimidating, dedicated, and loyal is how the K9 anti-poaching unit in the Kruger National Park (KNP) is described.

Akita and her pack’s job is to protect rhinos residing in the KNP to the best of her ability. However, since her service began she has had two potentially fatal encounters with powerful animals but survived both, Lowvelder reports.

ALSO READ: Man and dog keeping poachers on the run

In March last year, then-seven-year-old Akita came face-to-face with a Kudu bull during a patrol, and had a confrontation with a lion a few weeks ago.

Manager of the KNP’s K9 unit Johan de Beer explained that the dogs usually have a fitness day on a Sunday morning in the park. At a stage, Akita began sniffing around in nearby bushes, unaware that she was being watched very carefully by a lion.

The lion clearly disliked Akita’s presence and attacked her. Akita did not take well to the lion’s aggressive behaviour and fought back until the lion let her go.

Lucky for Akita, the lion let go quickly enough to give the K9 unit’s trainers time to get her help.

After the incident, de Beer took to Facebook, announcing “Akita 0, Lion 1”, adding in the post his gratitude to Lowveld rangers and Dr Gert Scheepers, the Phalaborwa-based veterinarian who treated Akita.

Everyone was surprised at the sheer speed of Akita’s recovery, despite being so seriously injured.

De Beer confirmed on Wednesday that she was already back in the field and that from next week, she will permanently resume her integral job of protecting rhinos against poachers.

Lowvelder reported in March last year that while Akita was chasing suspected poachers, she was attacked and impaled by a Kudu bull, whose horns ripped through her chest. 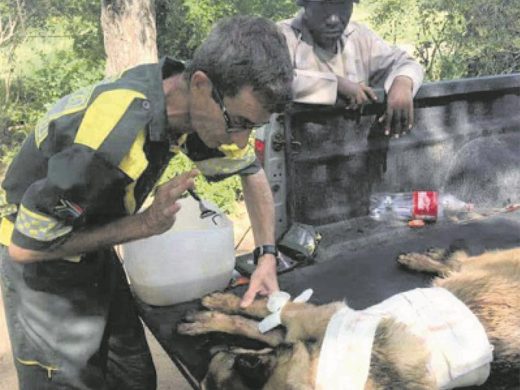 Paramedic Jaco Gerritse treating Akita after she was attacked by a Kudu bull last year.

Thanks to quick thinking from Letaba’s ranger Andrew Desmet, paramedics and a helicopter descended on Mbombela to save Akita.

She was treated at the West Acres animal hospital before she returned to the K9 unit in the Kruger Park.

When asked about the possibility of Akita landing herself in a similar situation in the future, de Beer took a philosophical approach.

“We know that we work in a national park and that there are lions and other wild animals that lurk behind every bush,” he laughed.

“Akita is an example to everyone that we must do everything in our power to protect our rhinos.”