Ria Grunewald told the court of how the accused terrorised her, and claimed that one of the accused was a werewolf that had murdered babies when she was a Satanist. 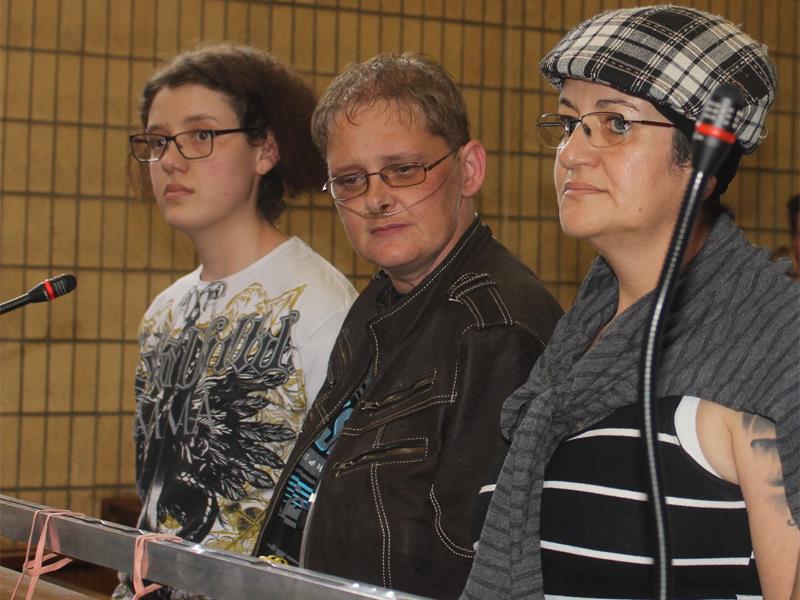 The trial of the remaining three accused in the Krugersdorp murders case, Cecilia Steyn, Marcel Steyn, and Zac Valentine, continued in the High Court in Johannesburg this week, with the state’s key witness, Ria Grunewald, testifying.

Grunewald told the court that she also “died” at the hand of the Krugersdorp killers. She had to change her name and now lives at a place of safety, reports Krugersdorp News.

Grunewald was the leader of the Overcomers Through Christ (OTC) ministry. She and Cecilia worked together on a course called Know Your Enemy. This course taught church members about satanism.

The state argued that the murders started when Cecilia and Grunewald had a falling out, because Grunewald wanted to move on to a Know Your Saviour course, and Cecilia wanted to continue with the first.

Grunewald testified that Ted Bundy, Jack The Ripper, David Berkowitz (Son of Sam), and Charles Manson were just some of the serial killers that Cecilia admired. She also used her knowledge about them to develop the course material for Know Your Enemy.

David Berkowitz claimed that the demons in his head made him commit murder, whereas Charles Manson had his followers kill for him.

Grunewald testified that Cecilia was a werewolf and her fangs would come out when she “turned”. She claimed to have seen Cecilia’s fangs grow; the first time she met her and on another occasion in Wimpy. One day when she visited Cecilia, she saw her fangs again, and after giving Cecilia a hug, they disappeared.

She claimed that after the fangs had disappeared, Cecilia let her feel the bumps on her gums.

Grunewald said Cecilia admitted to her that she committed many murders when she was still a Satanist, even killing a baby once. Cecilia denied this.

ALSO READ: Krugersdorp Murders: ‘She was sent to open the gates of hell’

Pastor George Nel from Lighthouse Full Gospel Church in Randburg had his car broken into, his church almost burned down, and he was threatened at gunpoint, said Grunewald. She said Cecilia and the rest of the group tried to get back at her by attacking OTC members. Natacha Burger’s vehicle tyres were also slashed.

Grunewald eventually started believing that the Satanic church had hacked her cellphone and email, because Cecilia knew her every movement and her whereabouts.

When the OTC members’ cars were targeted, Grunewald said she felt responsible and realised that she did not want someone else to get hurt.

Grunewald started doubting Cecilia, but kept on taking care of her. However, a call she received made her decide to ‘get out’.

The person who phoned her knew Cecilia very well, and told her to get away to save her own life and that Cecilia was nothing but trouble.

She had a meeting with the woman and another of Cecilia’s friends and they told her everything about Cecilia.

Grunewald subsequently asked Marinda Steyn to take over Cecilia’s care. Grunewald told Cecilia that she was not allowed to come to the Know Your Saviour sessions anymore, and in 2012, Cecilia told Grunewald that she had met with Satan, and he supposedly said he was not playing anymore.

Grunewald believed this to mean that the “attacks” on Cecilia would worsen because the Satanic Church wanted her back.

After a huge disagreement, the two parted ways and Grunewald started ignoring messages about Cecilia’s “attacks”.

Then the attacks on the OTC members started. According to Grunewald, the day before Natacha Burger was murdered, Grunewald met with Cecilia to tell her that she was disbanding her ministry. Cecilia apparently did not like this and said that she thought bombs were bad and that people would now be paying with their lives.

Just before the OTC was disbanded, Burger wrote a prayer that was read aloud at one of the meetings. Cecilia later told Grunewald that this prayer had killed 171 children from the Satanic Church and that the news had ‘broken’ Burger.

After Burger’s murder, Grunewald started receiving text messages asking if she could see the next one coming. She was told that Burger “squealed like a pig” (when she was killed).

Pastor Reg Bendixen, who was Grunewald’s mentor, helped her develop the Know Your Saviour course. Just before his death, Grunewald received a text asking her if she had said goodbye to Reg.

She sent the text to someone in the police, who told her not to worry. But by 7pm that evening, she was informed that Bendixen had been killed.

She told the court that on her way to Bendixen’s funeral, she found a bloodied note at her door, which read: “Sorry, this is all the dogs left you, here is your own piece of Reg.”

On top of the note was “the bloodied piece of an organ” she said.

She said Cecilia was jealous of their relationship with Bendixen, and told her that every time she spent time with Bedixen she would bring back demons and they were causing problems for her.

During cross-examination, Amanda Nel, Zak Valentine’s lawyer, also asked Grunewald if Satanists would take control of other people to make them commit murder, even if they were not inclined to do so, in order for them to get Cecilia back. Grunewald said yes.

The State concluded its case. Each of the accused’s lawyers will be calling their witnesses to the stand on Thursday.