The programme, in which they have partnered with government and private companies, also seeks to keep money in the community. 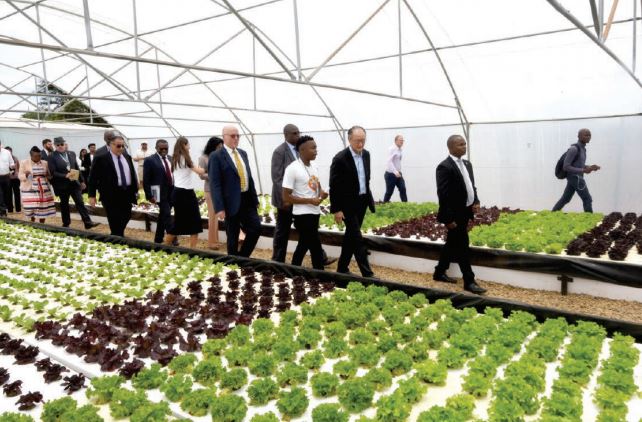 Tourism Minister Derek Hanekom, fourth from right, follows the president of the World Bank, Jim Yong Kim, at the first Youth Employment Service community hub in Tembisa, Ekurhuleni, yesterday. The World Bank’s strategic goal is to reduce poverty so the hub, established to assess youth, equip them with the right skills and then place them in jobs, was of particular interest. Picture: Nigel Sibanda

In the heart of the bustling Tembisa township in Ekurhuleni, Mishack Masipa runs a thriving restaurant out of shipment containers, stacked into two floors.

It lies in a hi-tech job creation and entrepreneurship hub.

Born and bred in Tembisa, Gauteng, the 27-year-old known as “Mish da Chef” – which is also the name of his eatery – is the perfect flag bearer for an ambitious drive to create a million jobs for the youth.

“Almost everything cooked and served in the restaurant is produced right here in the hub,” Masipa explained yesterday. “Vegetables are produced here using technology in a controlled environment by young people as part of their ecosystem training.”

The restaurant, opened two years ago, employs six people and nothing on the menu costs more than R100.

The YES (Youth Employment Service) youth community hub, from which Masipa operates, is where unemployed young people are assessed, equipped with skills and then linked up with companies for placements.

With free internet access, it also equips young people with entrepreneurial skills according to their talents.

Tembisa, the first YES Youth community hub, was launched a month ago. It is a one-stop facility, bringing investment and technology into the heart of communities, where the youth are.

YES For Youth chief executive Tahmia Ismail-Saville told them this was where youngsters would be saved from the grip of unemployment.

She told The Citizen that six in 10 young people in the country were unemployed; 60% of unemployed people were in townships.

“We were tasked with creating a million jobs. We have parallel streams to create those jobs.

“One is in companies where [they] can take on youth and give them work experience. If you give a certain number of work experiences in a year, you can move one level up on the BEE score card.”

They were trying to drive business development, entrepreneurship and small businesses. A computer application builds a profile, evaluates the person’s qualities and abilities and links them to a market.

“The app can say that you are good at something that has to do with clothing marketing space and then we can direct you to the courses that fit … state-of-the-art technology that brings into the community the idea of growth, that I can be the master of my own destiny and I can test and see what is out there and can have exposure to these careers.”

The programme, in which they have partnered with government and private companies, also seeks to keep money in the community.

Ismail-Saville said they already have more than 2 000 young people placed in jobs, with more coming into the system.

“The system has over 5 000 jobs in place. But because of the December holidays, it has become a bit slow. In January we have another 18 000 commitments.”

More than 200 established companies have registered for the programme, with a commitment for support in establishing seven more such hubs.