This after the DA called on the Gauteng Department of Education to investigate the bullying incident that was captured on video on Monday. 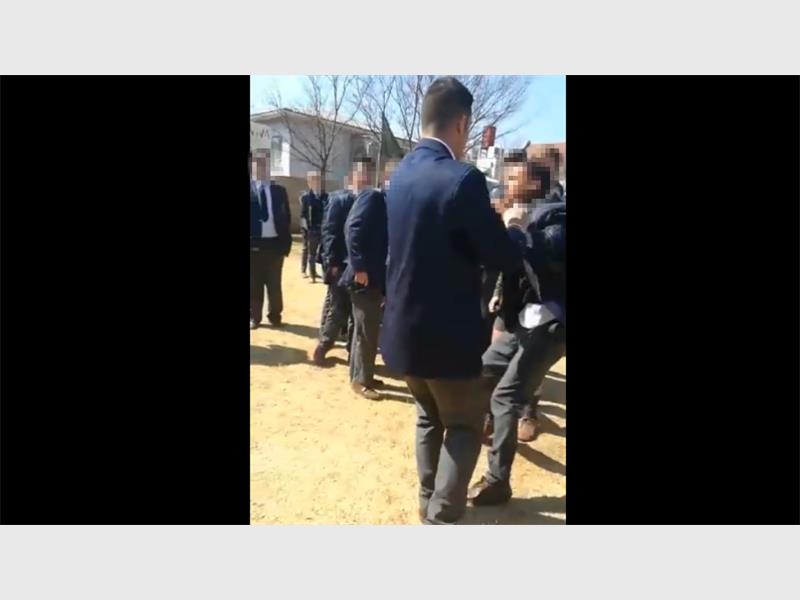 The two boys in the video.

The Democratic Alliance (DA) has responded to the video of two learners fighting at Hoërskool Monument, which went viral on social media, reports Krugersdorp News.

Their statement indicates that they are calling on the Gauteng Department of Education (GDE) to investigate the bullying incident that was captured on video on Monday.

“In a video that is being circulated on social media, one male learner is seen beating up another defenceless learner in front of other learners,” said the statement.

The statement went on to explain that the incident may have occurred during break time and on school grounds.

“The DA condemns any form of bullying and any form of misconduct in the strongest terms,” the statement noted.

According to the DA, this was the 296th incident of bullying and assault that has occurred this year, and there is a need for an immediate intervention.

“Despite the fact that the GDE has a policy of zero tolerance towards bullying, such incidents continue to occur at our schools.”

The DA believes it is the GDE’s responsibility to ensure that schools enforce a code of conduct to deal with disciplinary matters and incidents of bullying.

“They should also work with parents, teachers and law enforcement agencies to ensure that bullying is eradicated in our schools.”

The statement said that they are calling on the Department to ensure that the learner implicated in this incident is brought to book.

The Gauteng MEC for Education, Panyaza Lesufi, visited the school on Friday afternoon in light of the video.

I am on my way to @HMonument. I’ve taken note of your alerts. Will update you just after 13:00. @EducationGP

“I have just concluded a meeting with the school and the parents of the alleged victim. We have arrived at the decision that all affected learners must indicate within 48 hours why they should not be suspended.

“The school was severely reprimanded for not officially reporting the case. An urgent disciplinary hearing has been convened so that a decisive decision can be taken. No learner has the right to bully or harm fellow learners. If you do that, we will act decisively,” Lesufi said on his Twitter feed.

In the video, one learner can be seen holding another by his shirt and pushing him around. The one boy can be heard saying: “You smell like zol, come.”

Other children stand around while the two boys scuffle, and the one boy can be heard saying: “Now you come with me, listen to me,” and: “I am not going to leave you,” continuously.

Throughout the video, children can be heard laughing, and none of the bystanders made any attempt to help the boy.

The video has already garnered a lot of response from the public, with people asking for the older boy to be expelled, labelling him a bully. 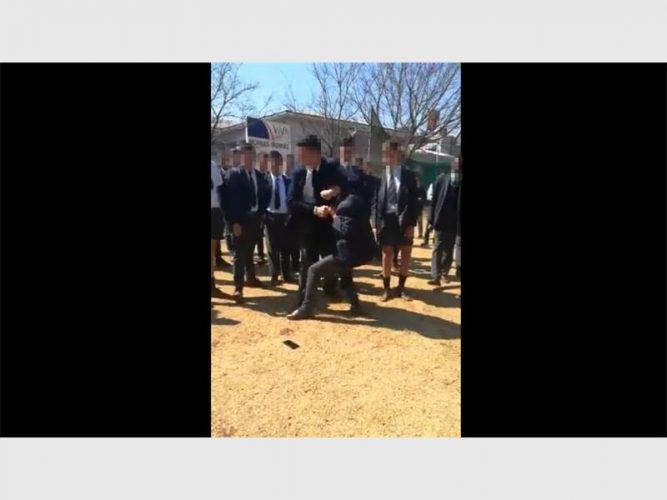 One of the boys could be seen shoving another boy.

Others expressed that there are two sides to a story, and suggested that the older boy was merely trying to take the younger boy to the principal’s office.

The school has provided a statement explaining the incident:

“Hoërskool Monument (Monnas) is fully aware of the incident that took place on Monday and also of the video that is circulating. The moment the fight happened, a member of the school personnel and a matric council member who was on duty at the time, noticed the fight and broke it up. They then alerted Monnas’ head of discipline, Niekie van Blerk.”

Van Blerk then called in the two learners to handle the situation.

“I have been in contact with the learners’ parents since Tuesday to try and sort out the situation,” Van Blerk said.