The contract is worth R3.6 million per month for a period of 18 months, ending in August 2021. 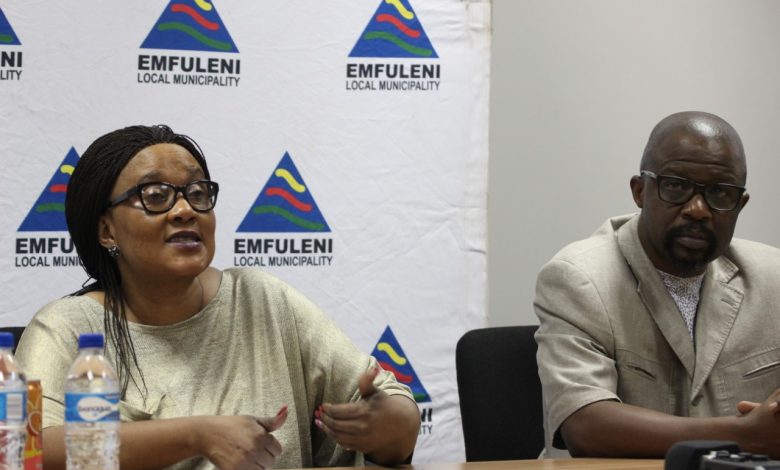 Municipality speaker, Maipato Tsokolibane (left), has apologised to the public for a recording that has been doing rounds on social media. She is seen here with Stanley Gaba who is the manager for communications and marketing at the municipality at an earlier media briefing. Picture: Supplied

The Emfuleni Local Municipality council speaker, Maipato Tsokolibane, has suppressed council discussion for months over an irregular Opulentia insurance contract, now linked to one of the most powerful men in the ruling ANC nationally, say councillors.

The contract is worth R3.6 million per month for a period of 18 months, ending in August 2021, the municipality has confirmed.

Tsokolibane – a key ally of former mayor and current Gauteng ANC secretary Jacob Khawe – was the main conspirator in the soft coup plot to illegally suspend municipal manager Lucky Leseane, in order to prevent the Opulentia and other anti-corruption reports from being discussed openly in council, the Sedibeng Ster reported.

The Golden Triangle Chamber of Commerce (GTCoC) has again demanded the removal of Tsokolibane as “the centre of ongoing efforts to frustrate anti-corruption cleanups” at the municipality.

“Tsokolibane must go – the sooner the better along with her close friend CFO [chief financial officer] Andile Dyakala for directly conspiring and undermining the democratic accountability process in council on many issues, of which Opulentia is but the latest,” said GTCoC chief executive offficer (CEO) Klippies Kritzinger.

The Labour Court set aside the supposed “suspension” by council recently but the Tsokolibane faction gained time to suppress the Opulentia report from being discussed by council, claiming she wanted to see the report first.

However, this was refused by the municipality’s auditing committee as Tsokolibane and the ANC chief whip [Christina Sale] in council had already attempted to doctor the earlier Comperio report into irregular contracts by removing the name of former acting municipal manager Oupa Nkoane from the report.

Tsokolibane has been widely criticised for manipulating council meetings and reports to protect her allies within the municipality, such as Nkoane and Dyakala, from disciplinary steps and consequence management.

Now Khawe is reportedly linked through his alleged girlfriend, a part-time director of Opulentia, to the awarding of the contract.

However, Khawe has denied that he influenced the awarding of the contract.

The Opulentia contract was originally formulated and facilitated by Nkoane, who is linked to widespread financial mismanagement at the municipality and the destruction of the smart meter revenue stream.

Sedibeng Ster posed questions to the municipality on the Opulentia issue and received the following reply: “We can confirm that the municipality [between May 2019 and February 2020)] undertook procurement of insurance brokerage services.

“However, this process was plagued by delays, including the bid selection criteria, reconstitution of the bid evaluation committee [BEC], and the unavailability of some members of the committee to attend meetings, among other internal administrative challenges.

“Due to these procedural delays in the competitive bidding process, the municipality, under the guidance and leadership of its former accounting officer [Oupa Nkoane], initiated a Regulation 32 process with the Matjhabeng Municipality.

“In implementing the financial recovery plan, an eight-pillar turnaround action plan endorsed by the Gauteng provincial government to improve the financial performance and service delivery of the municipality.

“The municipality has entered into an 18-month [4 February 2020 to August 2021] service level agreement with Fezi Auditors & Consultants [trading as Opulentia], in respect of short-term insurance intermediary, broking and risk consultant services, at a monthly cost of R3.6 million.

“We can confirm that the internal audit department has filed a report advising council on the matter,” said the statement.