For a change, those involved in the most recent clean-up of the Hennops river clean-up removed hyacinth, instead of rubbish which had accumulated and flowed into it. 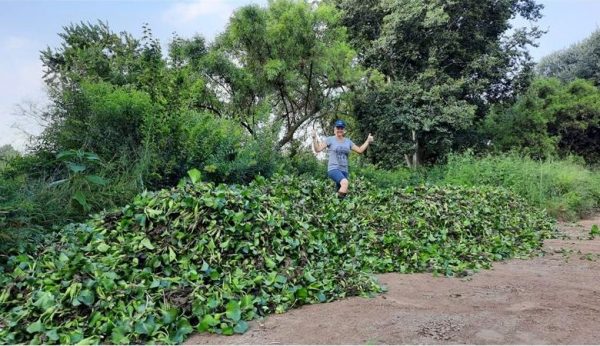 Hennops Revival founder Tarryn Johnston with the scores of hyacinth plants which were removed from the pond at the Hennops River. Photo: Supplied

Yet another clean-up operation was conducted at the Hennops river by non-profit organisation Hennops Revival this week.

The hyacinth plants were removed from the main pond at the river.

Johnston said the massive clean-up operation was made possible through the assistance of their dear friends who managed to rope in Court Schilbach from Tyremart Autowiel Centurion and Goscor (Pty) Ltd.

“We had such a lovely day playing in the water, loads of laughs and it was refreshing to be moving plants instead of our usual picking up of rubbish,” she said.

She added that she “deeply valued” the spontaneous action and decision by other companies.

Meanwhile, Bill Williams, in a letter to members of the Centurion Model Boat Club (CMBC), said approximately 10 tonnes of obnoxious weed was removed during the clean-up.

“These pictures show what has been done by the team of Hennops Revival who are dedicated to cleaning up the environment,” he said.

Williams said that taking care of the environment was not only their responsibility and that of Hennops Revival, but of everyone who cared about what happened to the environment and on their doorstep.

“Remember, don’t mess on your own,” Williams said.

This was the first clean-up headed by the organisation since the year began.

In November, a shocking amount of polystyrene and plastic was once again removed after it washed down from the river following heavy rains.

“As soon as the water level rises, more rubbish comes down the river,” Johnston explained.

She said that the rubbish was an accumulation of things which was dumped during the winter months which found its way into the river.

In an earlier interview with Rekord, she said it was believed that a business was behind the dumping of the polystyrene into the river due to the magnitude thereof.

“We are aware of the illegal dumpsites on the border of the Irene/Pindene. The pieces of polystyrene were up to 1200mm x 200mm so it was not ordinary protective packaging,” Johnston said.

Tshwane mayor Randall Williams indicated that he would engage with mayors from neighbouring cities in a bid to find a way wherein they could tackle the scores of rubbish which flowed into the river as he noted the pollution had been an ongoing problem.