Inside the ancestry of South Africa’s Afrikaners

Ironically, despite Afrikaners’ admixed roots, they rose to notoriety for their draconian laws that aimed to segregate groups of people – apartheid. 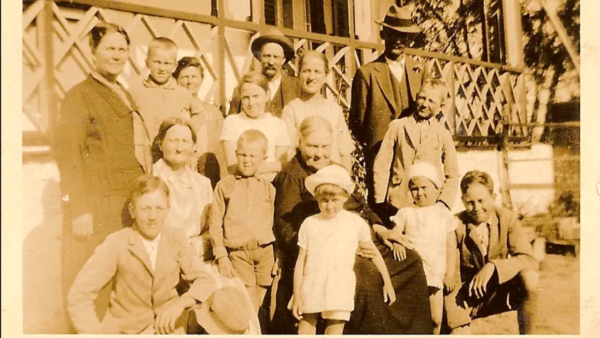 An Afrikaner family from the 1930s. Picture: Jaco Greeff

The story of human history is one of migrations over the globe and admixture – the exchange of DNA – between populations.

Two of the most dramatic of these migrations were slavery and European colonisation. The subsequent admixture between slaves, Europeans and indigenous populations led to the formation of new populations. One, at the southern tip of Africa, was a group that became known as Afrikaners.

Afrikaners predominantly stem from Dutch, French and German immigrants who settled in the Cape, in South Africa, during the second half of the 17th century and the first half of the 18th.

Although later European immigrants were also absorbed into the population, their genetic contribution was comparatively small. Another small but significant genetic contribution came from slaves and the local, indigenous Khoekhoe and San populations. These groups were, respectively, pastoralists and hunter-gatherers and in this article we refer to them as the Khoe-San.

ALSO READ: Believe it or not, Afrikaans is black

Ironically, despite Afrikaners’ admixed roots, they rose to notoriety for their draconian laws that aimed to segregate groups of people – apartheid – to allow discrimination against those not of European descent.

The colonisers required labourers and turned to slavery. In fact, there were more slaves than colonists at the Cape during the century preceding the abolition of the slave trade in 1807. The first 400 of these slaves arrived from West Africa in 1658. An estimated 63,000 slaves followed during the next 149 years. During the 17th and 18th centuries, most slaves came from South Asia. Slaves forcefully relocated to the Cape at the end of the 18th century predominantly came from East Africa.

People are, naturally, fascinated by their history. However, it is often poorly documented, recorded with bias, or not recorded at all. Given the central role that ethnicity played – and still plays – in South African politics, it would be good to have an unbiased estimate of Afrikaners’ genetic history. We set out to learn more about admixture in the formation of Afrikaners by looking at the genetic variation in their genomes.

Why is the historical information incomplete?

Admixture during the formation of the Afrikaner population is recorded in genealogical sources. But these genealogies don’t tell the full story, for several reasons.

Firstly, in the 17th and early 18th centuries some women used the toponym “van de Kaap” (meaning “born at the Cape”), irrespective of whether their parents were immigrants from Europe or slaves. Second, it has been suggested, but not recorded, that European farmers at the Cape had children with Khoe-San women.

Third, many of the children born in the Dutch East India Company’s slave lodge had unknown European fathers. The slave lodge served as a brothel for passing sailors and other European men.

Several potentially important genetic source groups – a substantial Muslim community, a small Chinese community and the local Khoe-San – were not recorded because they were not Christian. And admixed couples would have been secretive about their relationships because marriages between slaves and Europeans were outlawed from 1685.

By comparing the Afrikaners in our study to 1,670 individuals from 32 populations across the world we found that 4.7% of Afrikaner DNA has a non-European origin. That may seem like a small percentage, but 98.7% of the Afrikaners were admixed.

By studying this effect, the age of the admixture was estimated to around 1681. It’s around this time that colonisers began to settle at the Cape. In 1657, for instance, 142 employees of the Dutch East India Company were released from their employ to settle; 156 French Huguenots settled in 1688, and from 1675 yearly slave imports often exceeded 100 individuals. Therefore, this estimate aligns fairly well with genealogical and historical records of early colonial times at the Cape of Good Hope.

The admixture between European and Khoe-San was more common than church records suggest. In our study, though only 1.3% of Afrikaner genes came from the Khoe-San, most Afrikaners contained some Khoe-San genes.

The highest non-European contribution (1.7%) came from South Asia, or India. This reflects colonial men’s stated preference for marrying freed Indian slaves during the founding years. A little less than 1% of Afrikaner genes have an East Asian (Chinese or Japanese) origin.

The contribution of West and East Africa is the lowest, at 0.8%. This is likely to stem from the almost 18,000 slaves imported from Africa’s west and east coasts. The fraction of genes from West Africa is slightly higher than from East Africa, reflecting the fact that while West African slaves were few, they arrived four generations before slaves from East Africa.

A common perception about Afrikaners is that they stem from very few ancestors, which would have resulted in inbreeding. Inbreeding results in long stretches of the paternal and maternal chromosomes being identical to each other. By looking at the lengths of identical stretches, it is clear that Afrikaners are as variable as the average European. This is in part due to admixture between non-Europeans and Europeans, but also because Europeans came from all over Europe.

The strongest European genetic contribution is from northwestern Europe, with the most similar population being the Swiss German population. This signal could also be interpreted as a mixture between German, Dutch and French populations – as genealogical records indicate.

In conclusion, despite laws prohibiting mixed marriages from as early as 1658, and discrimination that culminated in the apartheid system, these genetic analyses confirm that most Afrikaners have admixed ancestry. Genealogical information has indicated as much, but these genetic findings are irrefutable.