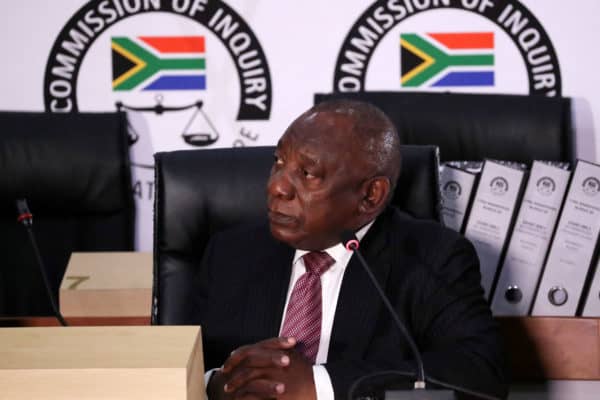 President Cyril Ramaphosa appears to testify before the Zondo Commission of Inquiry into State Capture in Johannesburg, South Africa, on 11 August 2021. A national inquiry into state-led corruption under Zuma's administration has meanwhile been underway since 2018. Ramaphosa testify for a second time, answering questions relating to his time as deputy president as well as his current position. Picture: Sumaya Hisham/AFP

President Cyril Ramaphosa on Wednesday dismissed allegations that he improperly influenced decisions at Eskom in favour of Optimum Coal Mine (OCM) during his tenure as the head of the parastatal’s technical war room.

“I had no interest in, nor any opportunity to, influence Eskom’s decision-making process in matters pertaining to Optimum,” Ramaphosa said in his opening statement to the Commission of Inquiry into Allegations of State Capture.

The Jacob G Zuma Foundation has threatened legal action over the handling of details of the former president’s health.

Zuma’s health status has been in the public eye after the former president was admitted to hospital last Friday for medical observation.

While the foundation previously said there was no need to panic just yet after Zuma’s hospitalisation, the military’s medical boss, Brigadier-General Dr Mcebisi Zukile Mdutywa, revealed in a letter that the former president suffered a “traumatic injury” in November last year.

The sheriff of the court will attach assets of GladAfrica Management Services after the South African Revenue Service (Sars) obtained a civil judgment and writ of execution against the company because it submitted pay-as-you-earn (PAYE) and value-added tax (VAT) returns without paying the money to Sars.

GladAfrica is a multi-disciplinary, built-environment consultancy. Sars said in a statement that the company’s failure to pay resulted in a debt of R88 million. The matter was escalated to the Sars PAYE rapid response team.

What to know about upcoming KZN N3 road closures

The temporary closure of parts of the N3 highway between Johannesburg and Durban is due to commence on Monday.

Work on section four of the integral 579km stretch of road will take place in two- and four-hour intervals, from 16 August, intermittently until September.

The area the road closure is due to take place in is Lions River.

The partial closure of parts of the N3 in KwaZulu-Natal is in order for Eskom to replace overhead transmission line structures and conductors across the highway, in order to continue delivering electricity to the area.

President Cyril Ramaphosa has revealed the five reasons behind his decision to continue to serve in former president Jacob Zuma’s Cabinet as his deputy, despite widespread allegations of state capture and corruption involving Zuma and his associates, the Gupta family.

Appearing at the Commission of Inquiry into Allegations of State Capture on Wednesday, Ramaphosa reiterated that it was better for him to remain in government with others who opposed what was happening because those accused of state capture could have done far much worse.

Milutin Sredojevic, the current head coach of the Ugandan national team, had a court date on Wednesday and Thursday in South Africa, charged with touching a 39 year-old woman ‘inappropriately’ as the Cosafa Games in Gqeberha on December 7, 2020.

Sredojevic was coach of Zambia at the time, and was arrested and released on R10 000 bail. He was originally due to appear in court in Port Elizabeth in May but the trial was postponed to August 11 and 12, after the Football Association of Zambia sent a letter, via Sredojevic’s attorney, saying Sredojevic was unable to obtain a visa in time to enter South Africa.

Having made its world debut just over a year ago, BMW has revealed the updated iX3 that will be coming to South Africa next year.

Initially planned for local market unveiling in the fourth quarter of this year, the premiere of what is now the pre-facelift model is unlikely to happen given the surprise tweaks Munich has afforded its all-electric X3-based offering.

We will not protect any ANC leader accused of corruption, says Ramaphosa
24 hours ago
24 hours ago

We will not protect any ANC leader accused of corruption, says Ramaphosa
24 hours ago
24 hours ago