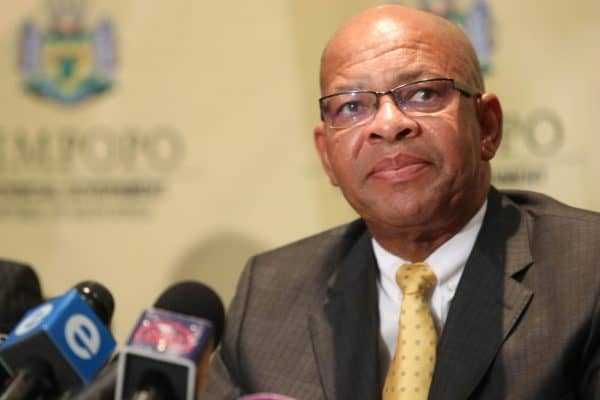 POLOKWANE, SOUTH AFRICA  DECEMBER 11: Limpopo premier Stanley Mathabatha during a media briefing on the outcomes of the provincial executive committee meeting about the VBS mutual bank saga on December 11, 2018 in Polokwane, South Africa. The ANC in Limpopo has resolved to fire seven of its mayors that are implicated in the VBS Mutual Bank alleged corruption. (Photo by Gallo Images / Sowetan / Antonio Muchave)

Calls for Special Investigating Unit (SIU) reports to be released on investigations into irregularly awarded personal protective equipment (PPE) tenders by the Limpopo provincial department of health are gaining momentum.

Now, the people of Limpopo, including opposition parties, accuse the premier of keeping the details of the report secret.

“We want to know who was involved, which companies were wrongly awarded the tenders, how much is involved and what next,” said resident Sanco Madia, who is also Economic Freedom Fighters’ leader in Mopani district.

On Tuesday, the Democratic Alliance (DA) wrote to Mathabatha, asking him to make the report a public document so anyone could access it. The party claimed this would ensure all processes to discipline those involved in the irregular awarding of the contracts were dealt with in a transparent manner.

“The people of Limpopo have a right to know which unscrupulous department officials, individuals and companies wasted public funds and resources during a devastating Covid pandemic,” said DA health spokesperson Risham Maharaj.

He said making the information public would help ensure that the affected companies never do business with provincial government departments again.

Maharaj added: “The money wasted by the department could have gone a long way in procuring additional PPE, medical equipment or in starting to address the crippling staff shortages in our health facilities, in particular our tertiary hospitals.”