Mkhwebane’s office probing ‘Thembisa 10’, while she catches flack for tweet

The PP's spokesperson says she tweeted in her personal capacity, and confirmed they have received a complaint from Gosiame Sithole. 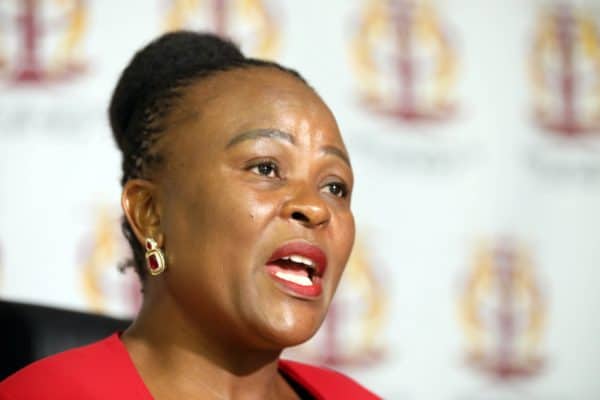 Public protector Busisiwe Mkhwebane has found herself at the receiving end of a backlash for a tweet she posted on the “Thembisa 10” saga.

Meanwhile, her office has confirmed that they are also investigating the matter, after a complaint from the still elusive decuplets’ mother.

Late on Wednesday, Mkhwebane posted on her personal Twitter account: “#Thembisa #eskom #Loadshedding #Decuplets this country though, heads must roll. Strength to you Gosiame Sithole all is well”.

The tweet came in the wake of a press briefing by Independent Media earlier that day where chair Dr Iqbal Survé continued to stand by the widely discredited story published in June by Pretoria News, claiming Sithole had given birth to 10 babies.

Survé claimed, among others, that an internal investigation had confirmed the babies were indeed born, but that two had died and the other eight “trafficked”.

He claimed the investigation revealed a massive government cover-up and that government officials and private hospitals were involved in a wide-scale baby trafficking ring.

The claims were, however, not substantiated and the Gauteng government has announced plans to take legal action
against Independent Media.

The private hospitals have also strongly denied the claims. By Thursday afternoon, Mkhwebane’s tweet had 660 likes and nearly 100 comments – many of which were critical in tone.

“I sincerely hope this is a parody account because if it is not… tweet is highly problematic. What would happen if this case lands at your desk for investigation?” tweeted @chillim01.

And legal expert advocate Paul Hoffman said on Thursday this was the problem. “According to the constitution, the public protector… is meant to conduct herself in a manner that is independent.

It therefore behoves her to avoid commenting on matters that may become the subject of a complaint,” he said.

Mkhwebane’s spokesperson, Oupa Segwale, on Thursday emphasised that “like all of us, she enjoys all the rights and freedoms enshrined in the Bill of Rights”.

“This includes the right to freedom of expression. Her being the public protector does not mean she waives these rights and freedoms. She tweeted in her personal capacity…”

“In the event a complaint is lodged, the office will investigate it in line with the provisions of the constitution, which refer to impartiality, independence and without fear, favour or prejudice…”

Segwale was initially unaware of any complaints related to the matter, but later confirmed that the Public Protector’s office had indeed received a complaint from Sithole.

“It turns out that our Gauteng provincial office in Johannesburg did receive a complaint in June from Gosiame Sithole and it is investigating,” Segwale told The Citizen.