South Africans have been hit hard by the highest fuel price increases in history, rising interest rates and hefty spikes in municipal services. 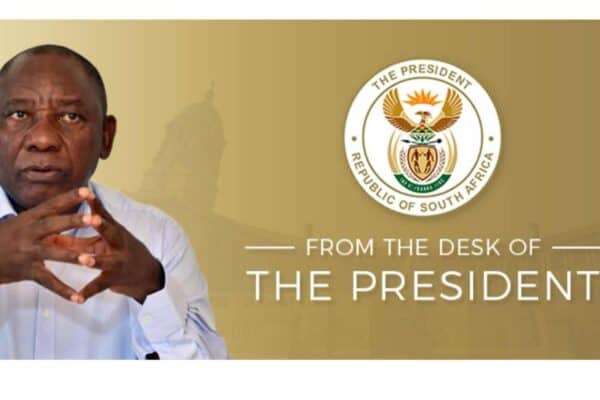 President Cyril Ramaphosa poses for a picture accompanying his weekly message to the country, ‘From the Desk of the President’. Photo: Presidency of South Africa.

President Cyril Ramaphosa says the government is doing what it can to shield South Africans from a volatile economic climate.

Ramaphosa was addressing the nation in his weekly newsletter “From the Desk of the President.”

South Africans have been hit hard by the highest fuel price increases in history, rising interest rates and hefty spikes in municipal services that have dramatically affected their quality of life as they battle to make ends meet.

It has become increasingly more expensive to buy food and other essentials, to pay for basic services and to use public or private transportation.

While these rising costs affect everyone, low-income households are feeling them the most.

The latest Consumer Price Index for April 2022 published by Stats SA shows there has been little respite for hard-pressed South Africans.

Food inflation was recorded at 6.2% while the price of fuel, which affects the price of almost everything else, has risen by a third in the twelve months to March 2022.

Ramaphosa said South Africa is not alone in this regard.

“A recently published poll from the World Economic Forum shows that nearly a quarter of people globally, including those in developed economies, are struggling financially due to rising prices. These increases, particularly the price of fuel, are the consequence of events over which we have little control.”

“The ongoing conflict between Russia and Ukraine has had a significant impact on the price of fuel and food. Both countries are major exporters to international markets of fertilisers, grains and oilseeds that are needed for a range of items such as cooking oil,” Ramaphosa said.

Ramaphosa said South Africa has a great advantage in an independent Reserve Bank that has managed to keep inflation within a narrow target range and well below what many other countries are experiencing.

“Last week, we announced that the fuel levy will be suspended for another two months to August, which will bring some relief to households. The suspension of the levy has provided essential relief to South Africans since it began in April.

“Since the suspension of the levy comes at a significant cost to public finances, which affects other programmes of government, it will be difficult to continue this indefinitely.”

Ramaphosa adds that to get through this difficult period, all of society should get involved.

“For our part, government will continue to monitor the situation closely and will do everything within its power to protect South Africans from unsustainable increases in the cost of living.”

“Corporate South Africa should ensure that consumers do not pay more for food than they have to. We welcome the indications from food manufacturers and retailers that they are putting measures in place to help consumers get more for their money,” Ramaphosa said.

Ramaphosa said though oil prices and extreme weather are events over which government have little control, there is still hope for the people of South Africa through this difficult time.