The leopard was euthanised after it attacked a Kruger Park employee 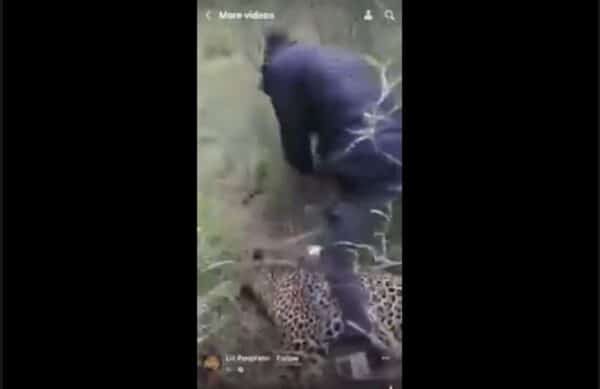 Screengrab of a video of a man repeatedly slapping a dead lion that attacked a SANParks employee at Kruger National Park.

South Africans are up in arms over a video showing a man, said to be a South African National Parks (SANParks) employee, repeatedly slapping a dead leopard.

In the video shared on Wednesday, a man can be seen slapping the leopard as others watch on.

“You will only hurt yourself as the animal is already dead,” another man can be heard warning the man slapping the leopard.

The leopard was euthanised this week after attacking an employee from the Shalati Concession, in the Kruger National Park, while on their way to work on Sunday morning.

According to SANParks in a statement, the employee fought off the leopard and called for help, but the animal disappeared into the bush.

“The injured worker was rushed to the doctor for treatment. He suffered deep lacerations and trauma but the injuries are understood not to be life threatening,” said SANParks.

An operation was immediately launched by the Rangers Corps and the Airwing to search the immediate vicinity for the animal. It was spotted 30 metres from where the incident took place and was “duly destroyed”.

According to SANParks, this was the second incident where a worker was attacked by a leopard in the recent past in the Kruger Park.

Head Ranger Cathy Dreyer stated: “Since the first incident every effort had been made to try and capture the leopard but without success. Given the location of the incident – we suspect that the destroyed leopard is the same animal responsible for the first attack but we can never be sure. Residents and employees must be extra vigilant and avoid walking alone at all times.”

The leopard has been delivered to the State Vets to undertake a post mortem.

SANParks has launched an investigation to determine the cause of the unusual behaviour by the leopard.

Well wishes for the employee have, however, been accompanied by uproar in the wake of the video, as social media users call for action against the man.

WARNING: Video may be disturbing to sensitive viewers

SANParks spokesperson Ike Phaahla told The Citizen on Thursday that they were aware of the video, adding that the man slapping the leopard was not a SANParks official, but a contract worker.

“We are aware and have expressed our displeasure at the behaviour of all those captured in the video. A report is going to be finalised this morning and appropriate action will be taken against implicated persons,” said Phaahla.