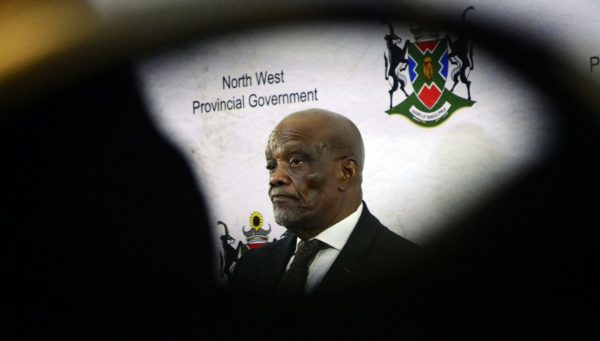 ANC veteran Bushy Maape has been announced as the new premier-elect of the North West province.

The announcement was made by the ANC’s interim provincial committee (IPC) co-ordinator, Hlomane Chauke, at a media briefing on Tuesday afternoon.

Mokgoro was appointed the premier of the North West in 2018 to replace former ANC provincial chair, Supra Mahumapelo.

Chauke said Maape’s appointment as the premier was intended to “entrench the work done by the ANC-led provincial government and expedite the rollout of radical socio-economic transformation in the province working together with the IPC and various provincial stakeholders”.

Three candidates were initially interviewed by the ANC’s national officials to replace Mokgoro; they included the speaker of the provincial legislature, Susan Dantjie, and finance MEC Motlalepula Rosho.

The announcement by the IPC came amid protests in Mahikeng close to the ANC’s provincial headquarters by people opposed to Mokgoro’s removal.

Chauke said the protests by mostly young people were organised by “certain individuals with their own interests”.

“These are young people who are supposed to be at work and at school and all of that. And therefore they then get abused by certain individuals that use them.

“We cannot sit back and have a leader in government that has sort of lost it at the level of having to implement what the ANC says we must do,” he said.

Mokgoro yet to formally resign

Chauke said Mokgoro remains a member of the provincial legislature (MPL) and he had not tended his resignation yet.

“It’s a process that is underway currently as you know that the party has already communicated with comrade Job. We now expect to receive his resignation, which will be via the office of the speaker of the legislature,” he said.

Mokgoro has been at loggerheads with the interim structure for a while now and has been accused of undermining its renewal agenda and efforts to restore stability in the province.

ALSO READ: NW Premier in denial after he and four others have ANC memberships suspended

In December, the IPC suspended his ANC membership along with five others for allegedly voting for an ANC candidate who was supported by the Democratic Alliance (DA) in the North West legislature.

This was in defiance of the IPC’s instructions because the ANC provincial caucus had suggested a different candidate and the voting process was conducted via secret ballot.

Chauke said Mokgoro would still face disciplinary action for not carrying out the party mandate.

“These are some of the weaknesses we will deal with because what we expect is that all of us must pull together. When the party has given a mandate, all of us are bound by that mandate of the party.

“Nobody else has the authority to do his or her own things when the party has spoken on these matters.”

The IPC also thanked Mokgoro for his contribution as the premier, saying they were engaging with the office of the speaker of the legislature on the swearing-in of Maape.

“We are currently working very closely with the office of the speaker, including the Independent Electoral Commission, to make sure that all processes are followed including replenishing the ANC’s legislature list,” Chauke said.

READ NEXT: Factions battle within ANC over North West